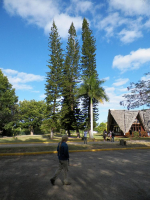 We were up early to the Viazul bus station and off to Playa Giron. Playa Giron is a beach resort on the Bay of Pigs. We aren’t big beach people. Bonnie really tries to avoid sunburns at all cost and I’m not a great fan of sunburns either. We were hoping to go to the Museum dedicated to the Bay of Pigs invasion but it was closed up. They are in the process of fixing it up.

As we traveled along the highway we noticed little memorials to people who had fought for the revolution. 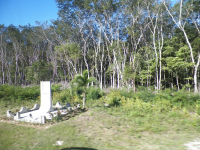 The casa owner wasn’t there to meet us so we had to arrange a bicycle taxi to the casa. While we were enroute Wilfredo caught up with us. They have bicycles for visitors to use. They are a fair distance from the beach so we enjoyed having the bikes. We were actually fairly tired from Havana and we had a bit of a cold so we just decided to sit for the afternoon. Wilfredo had a little bit of English better than our Spanish for certain but there were time he didn’t understand us and we would try to switch to Spanish. The trip to Playa Giron was a nice and we enjoyed the view of the beaches. The deep water is very close to shore. 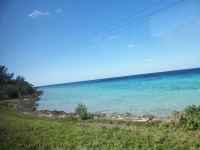 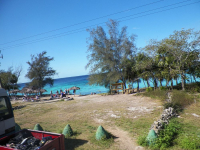 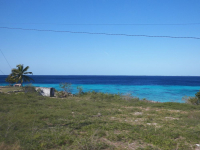 But we had a very quiet afternoon and just sat in the little covered picnic area outside our room in the nice chairs and spent the day just being lazy.