The last bridge to Turkey! Khalkis 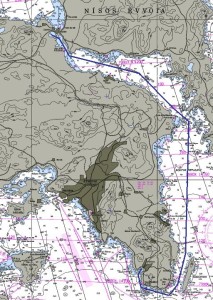 Our trip to Khalkis (The last bridge to turkey)

We were up at 3 am and around the point early. On our way the Temple of Poseidon was lit up very prominently high on the top of a hill. I tried to take a few pictures but the exposure was too long on a moving boat. 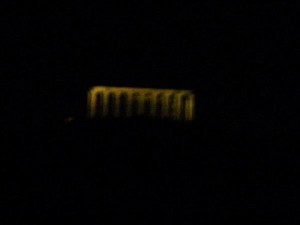 a little shaky on a boat

The weather was spot on with very light winds, Rick and I were sharing the wheel during the night hours and once the light started coming up Otz took a watch. Just before Otz came up a bat that had been somewhere on the boat sleeping work up and didn’t like where he was. He circled the boat several times and still didn’t find a spot he liked so he headed off toward the mainland after about 3-4 minutes of scaring Tsipy to death. At one point I wasn’t sure if Tsipy wasn’t going to jump off the boat to get away from it. It was a very big bat, not sure what species it was, it was about 9 inches or more across and the body was about 6 inches long and very light brown. 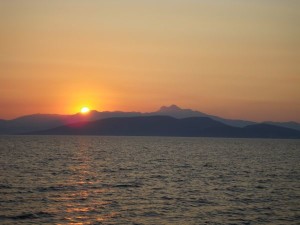 Sunrise near the end of Evia

I went down for at least a couple of hours and when I got up, Otz was ready to give up the wheel. He was worried about a couple of fast ferries that were “going to be crossing very quickly, very dangerous” He asked me to watch a point of land for the ferry, when he saw me looking at the radar and looking at the AIS he said to watch “THAT point of land AIS is not always accurate”. I didn’t have the heart to tell him the point of land he was pointing at was at about 1 o’clock and the AIS indicating location of the ferries were abeam of us. You could clearly see the ferries tied up on the port side just where the AIS said they were. So far the AIS system is really accurate, when the data is lost on a ship there is a line through the triangle indicating the last known position. When the triangle is showing it has information it is very accurate. As we came up to our anchorage at Khalkis we had to pass under a high, but narrow bridge. There was one tanker tied up just near a cement plan and ahead of us was a pilot boat waving for us to go off to one side. We were already on our way to a hiding spot as we could see a freighter on AIS about to make a turn for the bridge. Bonnie really understood the value of AIS over radar. She could see the ship turning toward the bridge before it was visible. We could see the ship around the corner before we could see the ship with our eyes. Bonnie approved AIS for the next trip south. 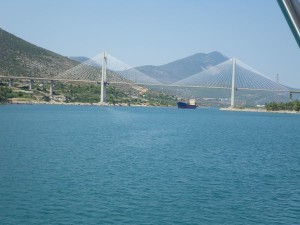 The reason Bonnie Approved AIS for the next trip south!

Once we were settled in our anchorage we went over to the Khalkis Bridge. The bridge is a low bridge and not overly wide either. Room for a tanker, so lots of space for us. This is another strange bridge for us, it retracts. The bridge opens once a night between 10pm and 4am at slack tide. The current through the bridge reminds me a mini Reversing Falls in Saint John. Rick was having a great time with the current spinning the dinghy around. On our way back to the boat we had to maneuver around a whirlpool about 12 feet wide and a foot deep in the middle. The currents were wildly confused and reminded me of the falls.

A couple of blogs that Rick had read on the Khalkas bridge talked about going down an “unlikely” alley to find the port police to pay for passage and get the information on the bridge opening. The guide book showed the Port Police on the other side of the bridge. We tied up along the east wall just down from the bridge in front of a bunch of restaurants. We were tied at the feet of a young greek couple who were very friendly and told us the Port Police were on the other side of the bridge in the white building with the blue trim. Score one for the guide book. We walked over and that Port Police pointed us back across the bridge “up street behind the internet cafe”, score one for the Internet! We walked up the street and just beyond the Internet Cafe and Online game place was an alley blocked by a couple cars and a couple dumpsters was the second Port Police office. We found the place to pay but you have to pay the day of the passage, the office opens from 4 to 8 in the afternoon. You can’t pay for tomorrow’s passage today. So Rick has to come into town tomorrow with the ship paperwork.

Another win for the day was stopping at a restaurant for a beer, the first didn’t seem to be the least interested in serving us so we went to the next, the waitress was nice and prompt, on the beer list was a “Schneider Weisse” Really good beer! And one of Rick’s favorite beers.

We were back and all was well on the boat, Shabbot is coming up so we are settling in. Tomorrow, Rick will have to come to the dock but Tsipy will be on the boat for the day. Bonnie and I will get Otz to drop us at the dock and we’ll get a ride back with Rick at 4pm.