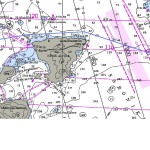 athens is the brown blob on the north east corner

Another short post, the meltimis are blowing strong across the Aegean so we can’t take a direct route across. There is a weather window tomorrow morning, another early start, to get from where we are and up to the island of Evia. From there we can cross the northern end of the Aegean in lighter winds and wrap around the top to get to Turkey. So We are leaving early tomorrow. Otz has to be leaving us to go back to work so we will put him ashore on Saturday or Sunday.

There were times that I wondered if Otz may be making a slightly early and wetter departure earlier today. But that’s another story.

Rick and I had more maintenance to do today. The Generator lost the raw water impeller and Rick and I spent the afternoon replacing the old pump with a new pump and rebuilding that seawater pump. We seem to be doing a lot of that lately