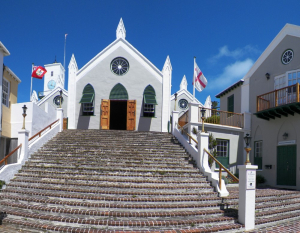 We were late rising. We went to visitor center. I told them we were here for the peppercorn and one of the men working in the place “You came all this way to watch them pampas asses” (He was one of the pampas asses in the receiving line at the mayor’s tea party, as it turned out)

We went to the Wahoo’s Waterside Had the Wahoo Woop-D do sampler and it was great. We split it for lunch and was happy. We skyped with Ian and got signed up for the Masonic lodges tour. We found out that you buy bus tickets at the post office. We bought 15 14-zone bus tickets for $37 14 zone is good for anywhere on the island. Bought a cell one simm card with $10 time on it for $20. 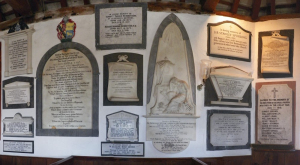 Looked at St. Peter’s, the oldest Anglican church outside British Isles in St Georges. We intended to go to Dockyards at other end of the island but didn’t get going fast enough. So when we got to Hamilton at 3. We decide to tour Hamilton a bit. Stopped into see the Anglican high church in Hamilton, it was beautiful.

We had coffee on balcony overlooking harbour and then walked over to Ian’s for spaghetti. Good From there we went to see a play at the Bermuda Musical and Dramatic Society called Little Wars. We enjoyed it a lot, it was interesting. For an amateur company they did a very good job.