April 17, 2016 The opening reception of the Peppercorn.

Got up late and went to the grocery store for supplies. By the time we got back it was time for lunch and we made lunch here (Grilled Cheese from a lovely old English cheddar) and then went on the walk around the tip of St George’s island and back to St Georges from the other side. It was about a two to three hour walk with our stops for looking around. It was a great walk and we enjoyed it a lot. 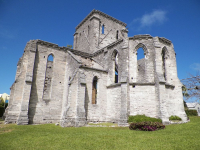 We started at the unfinished church. When the capitol moved from St George’s to Hamilton the church they were building as a cathedral stopped being built, and was never finished. As a result of the move to Hamilton they no longer needed the State House in Bermuda and they needed something to do with it. The governor at the time suggested that it might be good to give it to the masons for safe keeping. They could keep it up and in good repair and to assist them a low rent was proposed “one Peppercorn” (Yes one of those little seeds you put into your pepper mill) for a year’s lease to be paid on the Wednesday closest to St. George’s day. The lease is a perpetual lease so not just the normal 999 year lease. This is the 200th anniversary of the lease. And if you are thinking that was a really good deal, almost so good that the Governor had to be a mason at the time, you are right, he was.

From the unfinished church we headed over the hill toward Tobacco Bay. Another interesting bit of history started here when the American Civil war was looming. The Bermudians were very concerned that the proposed embargo of the loyal colonies could cause severe food shortages to the locals entered into a talks with Benjamin Franklin and others. It was suggested Bermuda might be exempted from that embargo in exchange for the gunpowder stored in the Royal Magazine nor far from Tobacco Bay. August 14 1775 a group of Bermudians broke in and rolled about 100 barrels of gunpowder down to the beach at Tobacco Bay to be delivered to American ships waiting offshore. Gunpowder was not manufactured in North America at the time. And the 100 barrels proved a very valuable resource. 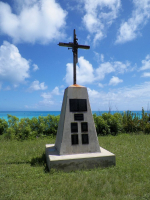 From there we walked around the point to St Georges. Beautiful long walk and got back to appt in time to change and head into Hamilton for the opening reception of the Peppercorn Ceremony I was in a suit and didn’t find out it was casual until after we were in town. 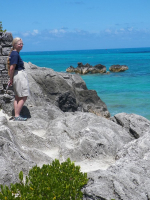 Met a few people I had met before. Martin Weeks was there and he was very pleased that all of the canadians who said they would show up, have shown up.
We went out to supper at Rosa’s Mexican food and had a couple of items from Kate’s kitchen. A lady has been selling healthy recipes that fit in with the genre of the restaurant as “healthy options” and they were very good.

Shauna got us out of the restaurant early so we were home by 930 First time I’ve been home before 11:30 since I got here.