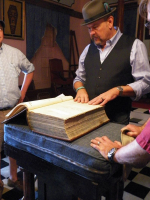 We good night’s sleep and were up early. We got another book of bus tickets and headed to the state house to join the guided tour of the lodge buildings. We were there before the bus and got an interesting history from Martin Weeks. He showed us the bible with the signatures of almost every member of the Royal family.

They had George Washington’s signature in it at one time but it was ripped out when the lodge was open for visitors and no one was there to watch the bible. They have a tressle board dating from the 1700s that is one of only two or three known to exist. Martin gave us a great slice of history and then when the rest of the tour arrived Lewis gave us another talk on the history of the lodge. Both were different an both were very interesting.

The governor’s council has to hold a meeting at the St. Georges lodge (after the peppercorn ceremony) or the government can actually end up loosing the title to the property. I understand that the meeting usually involves a bottle of sherry.

In the 1970s the government want to return the State house to the original shape and the lodge lost their ante room needed for ritual work so the government built them a annex on the back complete with kitchen dining room bathrooms.

The guided tour was lead by Martin and went to a number of lodges, St Georges, Hannibal, Civil and Military and the Freemasons hall where Atlantic Phoenix and Broad Arrow Lodge meet. They applied to the English lodge in 1797 and it took so long to get a response that in 1798 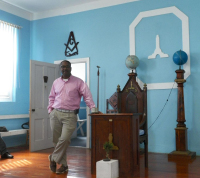 they sent an application to the Scottish lodge they got the responses back on the same ship (the warrants were dated two days apart)the story goes that the two warrants arrived on the same ship but the postmaster was a Scot so he waited a few days extra to give them the English warrant (so St Georges is a Scottish lodge) since they also had a English lodge warrant they formed an English lodge called the Atlantic Phoenix.

Ian joined us for lunch at the Civil and Military Lodge hall and gave some of the history and while the English lodges may have started in the 1700s the Scottish lodges have minutes dating back to the 1500s.

We went up to the St George’s club to Marc and Sues cottage. Nice cottage. We walked around the St Georges club and found the stairs to the foot of Hannibal lodge and walked home that way.

We are going to the installation of the broad arrow lodge (Kevin Weeks is very happy to be stepping down from the Worshipful Master’s Chair).

The installing master installed the master. But the master installed all of the rest of his officers. It was an interesting show. He needed one prompt the whole night. The festive board was $50 so I passed. Phillip from Virginia and I took a taxi home from Hamilton

Bonnie and the girls went to a hat making night. Where they viewed lots of hats made for the Mayor’s dinner party and you could buy the hats at auction.