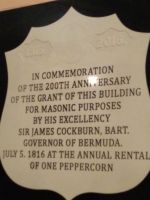 Up early for Peppercorn Ceremony. The members of the St George’s lodges were gracious enough to allow the members of the visiting brethren first chance at the seats. So we were packed in the State House pretty tight. It was amazing to see that many people in a lodge building. It was small but there were over a hundred people there. The Post Gazette had a number of nice articles on the Peppercorn. 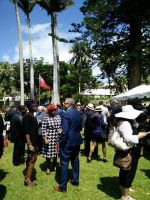 After peppercorn we went to mayor’s garden party We had a couple of snacks as they walked them around but if I were going again I would have had more. 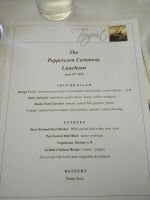 We were having the peppercorn lunch after the mayor’s garden party. It was sold out at 100 people we had almost 3 hours to eat a reasonable three course meal. The food was good but bonnie said it was the slowest she can remember.
Bonnie and the girls were in the post gazette. If you go to the gallery listed above you can see a bunch of pics including one with me and one with Bonnie. 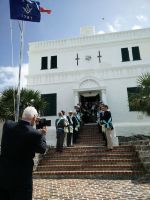 We went from there to Churchills the local provider of spirits and cigars. We bought a bottle of rum to contribute to Fred’s after party. The after party went on for a long night. We had one fellow from scotland that didn’t know where he was going for the night but Ian gradually figured out that he was staying in Larry’s apartment and we managed to get him a ride to the airport where he could get a ride home.