Last night after dinner we went for a walk out to the end of the street for the festival they were having for the town. There was a live band and kids were dancing and the adults were talking and eating, and watching the kids dance. 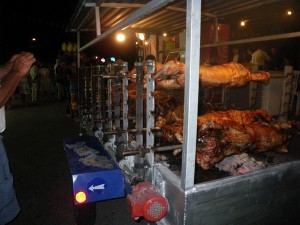 When they say BBQ they mean BBQ!

We watched the band for a while and then went for a small walk around the block. There were a few large mobile barbeques set up for cooking lambs. It was an impressive bit of engineering. It had an electric driven rotisserie  that was driving a bunch of worm gears that would rotate the whole lamb roasts.

It was very windy this morning, I slept in until almost 7:30am which is unusual, I was still the first to rise. The trip was long, almost exactly 24 hours on the “road”, so it takes more out of us than it first seems. Rick decided that he would spend another day in the marina before making a run to the next port. So we have a good internet connection for a couple days. I downloaded a bunch of pictures to the gallery

We took the no. 7 bus from the stop in front of the Massey-Ferguson dealer in Gouvia to downtown Corfu.  Since we did the old fortress yesterday today was walking around to look at Corfu itself. We walked the park and over to the palace/art gallery where they had an exhibit of Asian art. Part of the rising tide of China is the presence of so many art galleries showing Asian exhibits. This is about the third or fourth “Asian art” we’ve seen in places around the world. We wanted to see more “Greek” art so we just walked around to see the streets and the galleries and the people in the street. We ran into the synagogue and the woman let us in to look around Tsipy and the woman had a great chat. It was a pretty building. 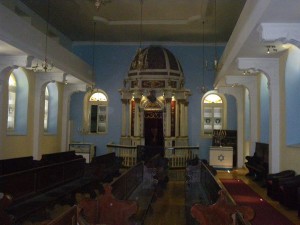 We walked and walked and it was starting to get hot. So we worked our way back to the bus station for a bus back to the marina. With the stern to the winds, the boat is relatively cool. On the bus I saw a sign that said it was 36C, I’m surprised Bonnie is doing as well as she is in the heat. 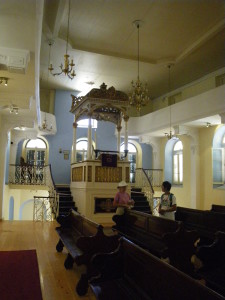 I did a little shoppingg at the Boatman’s World store but didn’t find the chain gripper I was looking for, I’ll watch for it in other places, Shopping in boat stores around the world, such a pleasure!