Today was a walking around Varadero day. We were only planning on a two day stay in Varadero before going into Cuba for the bulk of the month. We would be back in Varadero for a few days on our way out. Next year when we are planning on the trip we are going to plan on more days at the beginning and at the end. Varadero is old hat to us and we have seen just about all we want to see in Varadero but it’s a great place to decompress. We need that coming into Cuba and after a month in Cuba.

Awoke early and they slept late 10 am breakfast. Gave Bonnie a balloon and bracelettes Pepe invited us to El Rancho, where he is chef, for lunch. We were there about 2ish Having a problem with clock on our two phones. Our old unlocked “dumb” phone and our new smart phone are showing two different times and the “dumb” phone with the Cubacel SIMM card is acting the oddest. We found the Cubacel office and We got the sim card activated. After a turn off and on again so that the SIMM card could talk properly the clock reset properly, so that’s good. The band played happy birthday to Bonnie at the El Rancho that was nice. 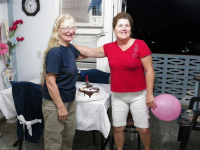 Joan gave bonnie a cake. Aylin, Joan’s wife came over and said hello as well. We talked a long time about cuba’s future. Changes are happening very fast and Joan is very nervous. Things are very busy in Cuba. The Europeans are coming in very large numbers they want to see Cuba before it changes. We have not noticed a lot of changes in Varadero but after being around other places in Cuba for a month (I am rewriting the blog as this is posted) They were too late. Cuba has changed a lot in the four years we have been coming. The last year has seen huge changes.