Before we left NB we had purchased all of the Viazul bus tickets online. After all of the trials we had last year in the east of Cuba, there was a GREAT incentive not to have to buy tickets and then come back to check in another day. The Viazul bus system is a painful process, it’s almost as bad as Viazul bathrooms! We purchased all of our tickets (except for the March 01 ticket to the airport as the change of schedule didn’t allow for purchasing tickets after March 01). 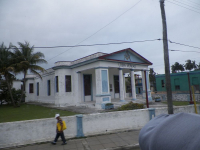 We left to Vinales early. The bus stopped at airport, the rest stop to Havana, Havana, Las Terrazzas(at the end of the road), Tobacco Route Rest Stop, Pinar del Rio, and Vinales. We tryed to book ourselves back into Marlyn and Adel’s but they were busy for part of our visit so they arranged our stay with their next door neighbor, Panchito. Panchito was there at the bus to meet us. I just about wiped out a person coming off the bus she was so aggressive. She appeared in the space that I was planning on stepping into as I came off the bus. Seeing as I was beyond my tipping point I was taking the space, I’m over 200 pounds with a couple of bags of luggage (add another 50) and this little young lady didn’t have much of a chance. She got out of the way quite quickly. I think she managed to even stay on her feet.

We came to his casa via the back door, we looked around and there was a set of stairs up to the roof. Marlyn was in her front yard when we were up on the roof having a look at the view. We had a nice chat, she isn’t sure there are going to be Americans coming. LOTS of Europeans around coming before the Americans show up.

We had chicken at Panchito+Norma’s good food, tasty, and lots of it, including an avocado off of the tree in the yard. 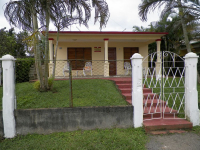 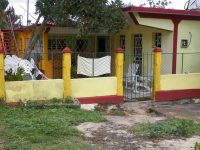