We weren’t leaving until early afternoon so that is a long wait. We cleaned up our room and left our luggage with Pinchito and went walking we walked up the street the opposite direction from Ermita and found the ball team warming up for a game. We walked down the long row of casas to the farm at the end of the road where the hiking tours start. 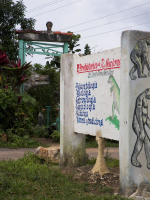 There look like there was a number of beautiful casas but a couple of them made me wonder how quiet it would be on the street, Casa Mojito was across the street from Casa Cuba Libre. The two most common drinks in Cuba. The garbage truck was going by and given the couple of dozen empty rum bottles from Casa Cuba Libre they serve a lot stiffer drink than Casa Mojito. There were lots of people heading off on the tour. We arrived at the ball park just in time to see the challengers arriving. On our way back we saw a little park someone made to look like a mini Jurassic park. We didn’t feel like going in but it looked cute.

From there we walked back down and stopped into see Marlyn She is not doing well health wise. Her wrists need surgery to remove cysts on her wrists which is giving her a lot of pain. Her kids are too small to work in the casa. Her daughter is now nine and her son is 15, but he is off at Pinar del Rio to school he stays for 7 and home for 3 days;

She gave us coffee and we talked about business. She has had a couple of bad experiences with American visitors and is leery of taking any more reservations. There are lots of Europeans and Canadians coming. So until she has to, she is sticking with them. She doesn’t think the US Congress will allow their people to come to Cuba.

We walked back and picked up our luggage and had a chocolate coffee and a cappuccino at 3J both were awesome! We had fried potatoes with salsa piquanti and they were very good and it served us well for lunch

We walked up to the Viazul bus stop and the normal half hour before the bus check in had us waiting in the square for a while. We got on the bus and got a good movie on the way out of Vinales. We took a few movies from the bus but have had mixed results

We arrived at the Tres Hermanas at Las Terazzas and it looks good so far. A minor glitch is that you can’t lock the door to our casa room so such is life. We’ll take our important stuff tomorrow and leave it for trust. (There is a lock on the door but it is a bifold door and even if it is locked the bifold will open. Such is life)

She doesn’t speak a lot of english and our spanish is very rusty so google translate is getting a little bit of a work out. So far it is working out ok.
Our new casa is taking the 100 mile diet to the extreme. The Chickens, eggs, pork, squash, cheese, coffee and milk for the coffee are all grown at the casa.

We have everything arranged for tomorrow (We think life is uncertain.) The chicken for supper was very good.