We took a taxi to Hotel Moka and got dropped off with the idea that we would get picked up at 4pm at the Hotel Moka. We were planning on walking down to the Bano de San Juan. They were mentioned by Marlyn as a very beautiful spot. We wanted to walk down and be early enough to get back before the worst of the day’s heat. We needn’t have worried. it wasn’t a hot day. We have had cool weather since we arrived. I’m kind of missing my fleece that I lost on the bus. 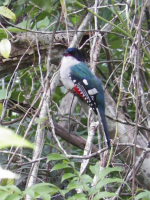 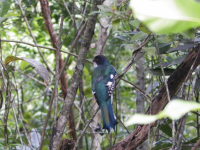 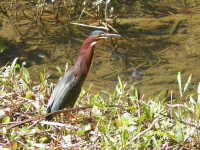 The walk is 3km one direction from the Hotel to the Banos. the road is down hill most of the way to the Bano. I wasn’t thinking that the return trip was going to be a lot of fun. But it wasn’t as bad as I thought. On the way down we had a great chance to see lots of birds. Bonnie was almost nose to nose with the national bird of Cuba the Torococo. I got a lot of good pictures. It has all the colors of the Cuban flag white and red on the chest and blue on the back. We were surprised to see it from our tours in Eastern Cuba they didn’t seem to think they were that many in the western end of Cuba 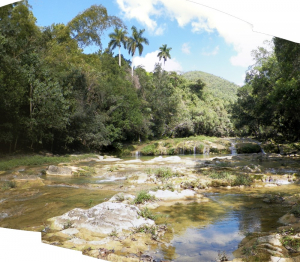 We walked all around the Banos de San Juan, the swimming holes of the San Juan river. I put my hand in and was sorry we didn’t bring our bathing suits the water was quite warm. There was very few people around and no swimmers. We got lots of pictures and a lot of panoramas. We walked back to the Hotel Moka and had a good couple of drinks the tropical was a blend of fruit juices and it was pretty good, the pina colota was ok but nothing to write home about.

The Hotel Moka is actually built around a bunch of trees. The Trees flow through the rooms and up out of the roof and through the corridors. It is an interesting building and we enjoyed watching the vultures from above as they flew on the thermals below us. We went down to the restaurant part and I had a cream of mushroom soup and bonnie had a Chocolate with milk. It didn’t rate with the chocolate with coffee of the 3Js. I had a Cafe Moka and that was the best cuban coffee we have ever had it even blew the stuff at Key Biscayne away. That was awesome coffee.

We decided that we could walk down to the bridge that leads onto the main part of the Las Terrazas and wait for the brilliant red car there at almost 4 and the car arrived we decided that we had better walk back up to the Hotel Moka. We took about 15 minutes to walk back and were only a few minutes late on our walk but there was no red car for us. We waited around front and eventually picked up a wifi from the hotel and we picked up my email. While I was looking at my email a guy came up to us but we didn’t understand Spanish at the rate he was talking so he went into the hotel and fetched a girl that was fluent in english. The red car had broken down and he was there to fetch us. Good thing we walked back. 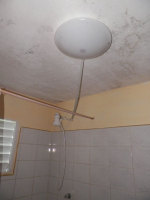 We got the ride back to the casa with time to have a shower before supper. The shower was like many of the showers that provide hot water in Cuba. It is a on-demand hot water heater. Activated by turning on the water if you turn the water on low the element can heat the water to quite warm (ALMOST hot) if you turn the water on full blast the element can’t heat the water to anything above luke warm. There is a fine line between having the water running fast enough to turn on the element and getting hot water and not getting anything above warm. If it is connected to a 220 circuit then you have a bigger range. Considering ours was wired from the circuit running the lights we didn’t really expect to get 220v. Some how thinking about getting 220v into the shower with you isn’t one of the things you normally have to worry about. Such is life in cuba. 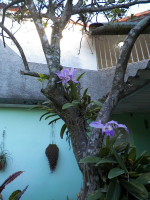 We had another meal of food from the casa. The pork was awesome, better than the chicken. Coffee, yaca, squash, pea soup, mango and cheese for dessert. 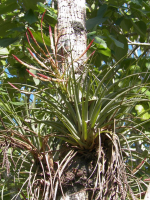 The egg bread was very good as was the garlic sauce for the pork. The rice was probably from the fields on the way between Pinar-del-rio and Las Terrazas so it was probably from 10km away other than that everything else including the milk for the coffee, and the coffee was from the casa. There are quite a few coffee trees at the front of the house.