Today was a waiting day for us. The casa had other visitors arrive on the first Viazul bus of the day and we were on the second bus of the day so we had to clear out so they could turn the room over. It is a $3CUC taxi ride one way to the casa. 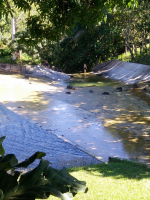 We took our stuff and spent the day in the las Terrazas Viazul area where most of the bus tours start. We sat in the little area with a couple table set up AWAY from the band. We ended up in the area where the bus tours do the orientation. So it was an interesting place to sit and play on the computer and listen to bus tour guide after bus tour guide give their slant on the area and the neat stuff to see. Coffee plantations, a chance to see the Banos de San Juan lunch and then a bird watching tour or … 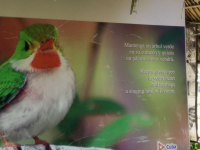 They had a couple of nice posters one of which is rather sappy but after looking at it for a day, grew on me. I think it will become my new email signature.

The area was deforested by (depending on the guide) Spanish selling lumber to Americans, Americans shipping lumber home, the French escaping the slave revolt in Haiti and growing coffee (some guides say the coffee needs shade so don’t blame the French), or locals for charcoal production.Everybody thought the trees would regrow but by the late 1800s the land was stripped. The trees didn’t, once the land was stripped the soil eroded away and nothing regrew. Back 49 years ago the Cuban government needed to bolster tourism and started terracing the land and planting trees, 26 million of 24 species (the number of trees vary, the number of species doesn’t, surprisingly enough. ) They terraced the whole area even if you can’t see them because of the trees it worked very well. It has been a UNESCO biosphere reserve

We had a quiet day and trying to catch up on the log and my pictures. I’m not taking a lot of pictures this trip except in Panarama form. 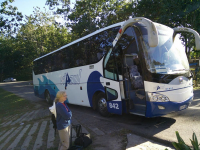 We got to Havana and our casa was a lot more “authentic” than most of our casas. This one is pretty rough. I surprised me that the owner and his wife were both uni-lingual Spanish. His daughter studying to be an architect like her dad, has pretty good in english. We were able to get everything figured out that we needed. So life was good except for the no toilet paper in the market where they shop, no problem we can use napkins. The owner wanted us to pay up full on arrival. This was the first casa that ever asked that. We usually offer to pay up full, but our cash supply was limited and paying her up front would have meant a leaner wallet than we like before we can resupply so we gave her $100 and said tomorrow. She wasn’t real pleased but didn’t have a choice.

The casa is right next to a construction site but it was quiet so I didn’t worry too much about it. He mentioned that tomorrow Sunday so not noisy but Monday it can be loud so we put us in the back room. The back room was equipped with an air-conditioner turned to ICE so we turned it down. The owner suggested several restaurants so we picked one we knew was close by and looked good, we saw it on the taxi ride in on the way by from the bus station. The food was good but the waiters were snooty.