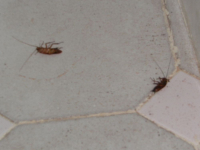 “Did you see the size of the cockroaches in the shower!” was Bonnie’s first words to me in the morning. I hadn’t bothered looking in the shower so I went and had a look. They were rather large! They were on their backs and mostly dead. They were still wiggling a little. We left them alone for the casa to deal with and headed out for the day. 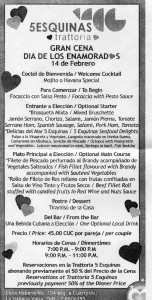 We hit TripAdvisor for restaurants near our casa before we left. There were several, one of which was #1 of 389 so we were on the hunt. We found it but the Havana 61 wasn’t open until noon. Just down the street was the 5 Esquinas. It was open and had a special offer on for valentines day $45 a couple and it included drinks, appetizer, salad, main course, and a dessert. It all sounded good so we bit on it.

We saw some nice street at one of the schools near the Casa. We walked over to take a look and found a treasure trove of of other art. 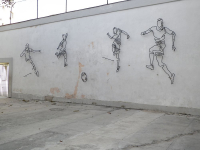 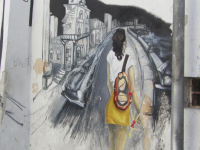 Havana had definitely changed a lot in the time since we were here three years ago. Construction everywhere. The National Theatre was a black hulk was now brightly polished and opened in January so it was still very bright and shiny. 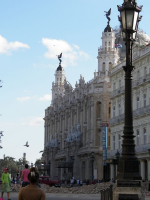 There was a show on but it was sold out except for the rush seats on the fourth and fifth balcony so we decided to pass. I think that was a mistake. 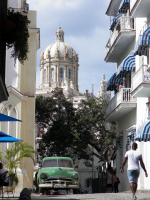 We walked around and it was amazing the amount of construction and work being done around Havana. A lot of old buildings that were almost beyond recovery were bright and gleaming. We noticed something we hadn’t seen before, Cruise ships, at least one a day, sometimes two. Everything was hopping. Obispo, the pedestrian tourist street was packed. We saw lots of performers, the mimes, the stilt walkers, the ladies with the fancy dresses and the huge cigars all out in force. We went to Prado 12 for a Mohito supposedly the best Mojito in Havana (according to the casa owner). It was good, the best, no but pretty good just the same. We found a really beautiful sculpture artist in Havana. I seem to remember seeing most of the same sculptures when we were in Havana last time and considering the $90,000 CUC price tag we weren’t surprised. 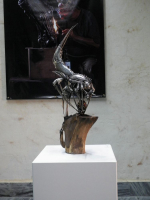 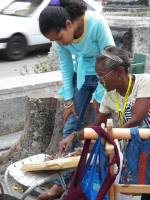 Since it was a Sunday the prado was in “sunday mode” a lot less tourists so the older people teach the younger people the crafts. There was lots of the typical stalls still there and less of the “sunday mode” teaching than we remember but there was still people being taught tatting and bobbin lace.

We went to supper and as normal we were a bit early “STILL closed preparing for dinner.” So we had to walk around a little more. We walked up the street and the church was open so we popped in and took a few pictures and waited near the front of the church. There was a casa in the square of the church called Hostal del Angel that looked a lot better than ours I wanted to go and see if they were available but Bonnie said our current place was ‘endurable’. A little more accurate than ‘authentic’.

For the same money we could have a nice place or somewhere ‘endurable’. When we got back for the day there was a note (In pretty good English!) apologizing for the insects! The fumigators were seriously working in the area. We have seen them all around Cuba they take mosquitoes as a serious problem and we had heard the whine of the fumigation equipment.

By the way, my first words to Bonnie was Happy Anniversary.