When we were on the bus Bonnie noticed a piece of street art on the Malecon she hadn’t seen before so she wanted to go looking at it. It wasn’t far from our casa so we walked over and it was very impressive. One the way we noticed a couple of casas that will go into our notebook as possibles for the future. We tried to get into one of them but it was booked solid. We noticed another couple of casa that had a sticker that was “certified by rent.cu”. 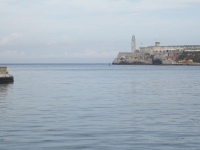 Another web site to check out, We have been using the same web site to help us book places since we started and stayed in two different places in Old Havana and both of them have SUCKED! Places other than Old Havana have been for the most part pretty good. I think we just have to be a lot more careful now than we were in the past. There are a lot more casa flooding onto the market and some of them are up to scratch and some aren’t. The casa where we are now, will not last long term. They just don’t know how to do it.

We walked down the Malecon for a while to get to the street art and it was in impressive installation. We crossed the Malecon and then walked back toward the harbour and along the edge of the harbour all the way to the art gallery. The winds were down and the harbour was calm the small fishing fleet was sitting quietly in the entrance. There were lots of people fishing from the edge of the street and it was a very nice walk. We were walking along and a working girl was walking beside us sort of keeping pace until a Transur bus driver whistled her over. He was on a break. Might as well make the long wait more enjoyable.

We walked down along the harbour and notice that the Russian Orthodox Church was open. We went in to see if we could get in or if they would direct us away. But they basically ignored us as they went to work cleaning the church. It was an impressive building we took lots of pictures and spent a while looking at all of the art. We enjoyed looking around.

From there we walked around the artist gallery in the big warehouse down by the water. There were a couple pieces of art that caught my eye. One was a couple of young boys standing on the wall of the Malecon and looking at the calm waters. It was an interesting piece of art both artistically and politically. We notice that artists everywhere seem to have a very pessimistic view of the future. From street art to the art they sell to tourists, a lot of the art has a nervousness view of the future. I should have bought it then, the next day it was gone.

We walked around the old city, just walking the streets of the 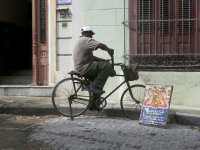 old city taking a street you haven’t been on before and walking around is a nice way to spend a day. We found lots of street art and saw lots of things we never expected. We happened on a mobile sharpening service. 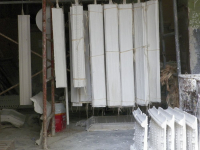 A guy who had rigged a grinding wheel to run off of his bicycle so he could put his bike up on the kickstand, and peddle his bike, the wheel caused the a pulley to spin and there was a belt from the pulley to a grindstone mounted on his crossbar. 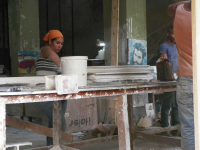 We watched him sharpen everything from a Machete to a kitchen knife to a pair of scissors, a very simple and impressive system. We walked around and found a place fabricating bases for columns and fancy trim and corners for the old building restorations. It was an interesting place to see. 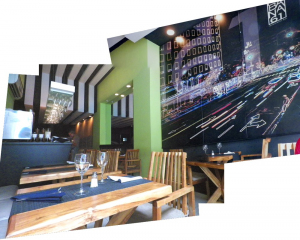 We were back at Havana 61 again for supper again and the waitress was very happy to see us again. We enjoyed the food again it was great. So were the Pina Colatas. 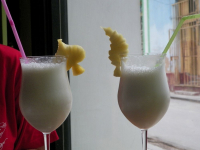