We took the bicycles offered by Wilfredo and headed back to the Museum to look at the outside exhibits and look around a bit. The exhibits were in good shape and the building was being actively worked on which was nice to see. 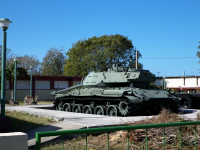 Maybe the next time we go we’ll be able to get in and see the inside of the Museum.

We rode the bicycles around the Playa Giron Resort. There are lots and lots of chalets and a very good portion of them are empty and trashed. We toured around the resort and almost no one was visable. It is mainly a dive resort. The dive boat is actually a truck. The deep water is so close to shore they just drive to the dive site and let you swim the 20 or 30 meters to the wall. It may be that the bulk of the people were off on a dive. We walked around and found a old sea wall that was being pounded by the surf. It was fun to just sit and watch the ocean.

We drove down to the public beach area and settled in for a few hours. The beach is protected by a reef not far offshore. The water was great and warm, we both had a swim for a little while. At the end of the beach was a place where the fisherman had set up a place for pulling up their fishing boats. It was an interesting mishmash of boats. 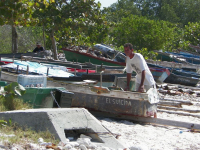 We were surprised to see several topless ladies on the beach. There are a lot of Europeans around this year so that could explain it. 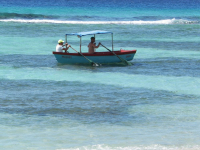