Feb 26 Our last day in Trinidad

Today was our last day in Trinidad and we were not really anxious to see anything in particular, so it was more along the lines of strolling around and doing a bit of people watching. We walked around a lot and sat in the various parks.

One thing that we appreciate when we are in Cuba is the food. If you are familiar with resort food in Cuba, we are NOT talking about the same thing. We eat at the Casas and for the most part local restaurants that are not on the tour circuit, and we try to avoid the government restaurants when we can. 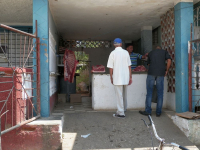 If you hear someone complaining that they went to a restaurant and they couldn’t get a fish meal that day then we consider that a good sign. Cuba does not have an industrial fishing fleet. They can’t supply the resorts with the fish from their own fishing industry for the most part they get their fish in the same place we get most of our frozen fish CHINA! When I hear that something wasn’t available that day then they are probably sourcing their food locally. Local food is usually very tasty. It won’t be a melt in your mouth steak (EVER), but the chewing will produce a flavor you probably haven’t tasted in beef in years at home. The chickens in Cuba have a flavor that I haven’t tasted in the industrial food we get in Canada. The butcher that operated out of the house next to our casa didn’t have a fridge to store his meat it was hanging beside him. You could see what he had on offer that day. 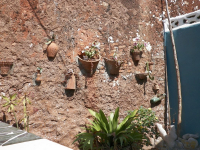 We spent a lot of time in the park where the WIFI hotspot was. We met a woman who was doing her email for her casa and having troubles with the wifi. She is running a vegan casa. She was originally from Ireland she had moved to Cuba and was very happy to have her residency. She was trying to appeal to a special market. She said that over 1000 casas had opened in Trinidad alone in the last year. Some didn’t last long. Some aren’t up to snuff and will fold. She is afraid that the sudden influx of new casa owners that aren’t ready would damage the market for those that were already established and had a good product. (I was thinking of our casa in Havana when she was talking. They definitely qualified as ‘not ready’. If I can find her card again I May put it online for those interested in the Vegan option. 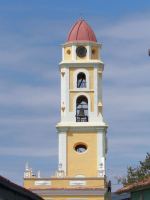 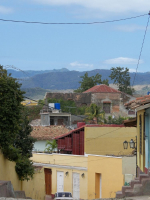 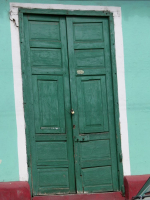