Feb 5 Fantastic bus trip from Santiago de Cuba to Baracoa and we almost made it.

Wilberto shows up in the morning and we made it safely to the bus terminal. He didn’t say a word and neither did I. The casa owner made us a small breakfast it was very early and didn’t charge us for it. Bonnie figured it was a peace offering. It was only after we settled it the bus terminal that bonnie got around to asking why I didn’t want Wilberto. After I listed about 3-4 reasons not counting the rip off charge she may have understood the point. 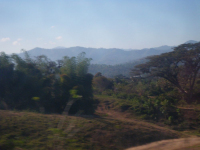 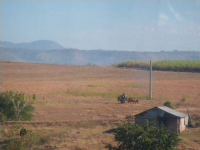 We got on the bus and headed to Baracoa. The bus trip is through incredible scenery. Super mountains and rivers, seacoasts and mountain passes. I took over 200 photos out the window. I usually take lots of those on these bus trips. Very few, about 5-6, are worth keeping but every trip has one or two of the hundreds that turn up to be very good photos. We made it through the mountain pass and stopped at a farmer’s house “20 Minutes” called the driver. The sign in front of us said “Baracoa 27 km” and it had to be mostly down hill. When we got out there was a distinct smell, I thought it might have been brakes but it wasn’t quite right. The engine compartment came open and the boys started fishing out tools and belts. Not exactly sure what happened but after a bit more than 20 minutes we were back on the road again. The trip to Baracoa is worth the 15CUC just for the scenery. It is worth much more than that to be OUT OF Santiago do Cuba. 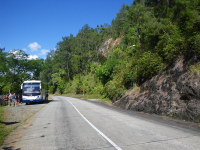 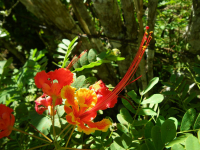 Santiago started with a 4 hour wait for bus tickets to get out and Wilberto and our last day was a LITTLE bit less than 4 hours in banks trying to get money basically 2 days out of 6 dealing with Cuban bureaucracy, and the cherry on top was the mess with the casa about Wilberto. About the only thing we didn’t see that we wanted was the Emilio Bacardi Museum. And that isn’t worth dealing with Santiago de Cuba again.

We arrived in Baracoa and there was a bicycle taxi waiting for us. The sign the guy was holding looked something like if you mashed spanish and english together and spelled it phonetically. I ask if he was from Casa Dourkis and he connected my spanish but nodded, and took us to our casa. It has a spectacular 360 degree view the Caribbean on one side and the mountains on the other. AWESOME.

After checking in we walked up to the bus station and they said to come back in the morning to get tickets. From there we walked to the main square and found an Infotur who seems to have a job that does nothing but point you to other places he pointed us to a Cubatur. We booked a tour for the next day. We walked back to the casa and sat on the terrace and drank water and I started working on the trip diary. Bonnie did a bit of reading. Another couple is staying in the casa. They are from holland and driving on their own, 1800 km so far. They are a week and a half into a three week trip. They have done about the same trip as we have in 3 years. They have an interesting view of the cubans as well.