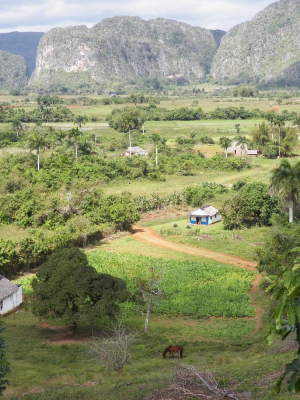 Breakfast was good. Boiled eggs, bread cheese, pancakes, fruit, coffee, juice, and pasteries, served in the little kitchen in front of our room.
We visited Vinales on our first trip to Cuba in 2013. There have been a lot of changes. At that time we stayed at Casa Maryiln and she was on the last street before the farming fields started. There is a least one completely new street now complete with new casas, a nice restaurant, and homes.
Vinales is looking much more prosperous. All of the pizza and sandwich joints cooking on split oil drums are gone, new nice restaurants in their place. (Although I wouldn’t be surprised that the split oil drums are now in the back yard.) There is at least a nicer image on place. Lots of fresh paint and things seem to be much busier with tourists. There is now a hop-on hop-off bus. There is only one bus and it takes an hour and a half to do a loop and it is very full. The increase of European visitors is overwhelming the bus system and talking to a number of people they are very nervous about what happens if the Americans come in full force. 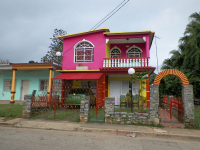 When we were in Varadero Joan told us of a couple that couldn’t find an available casa when they were visiting in Vinales and they ended up sleeping in the park overnight. They were taken in by the local police force who gave them a jail cell to sleep in, with the door open, but at least it was a softer bed. It is hard to believe every casa was full. Every house seems to have at least one room available for rent in it.

The local square is one of the new WiFi hot spots. Everybody, Cubans and Tourists alike have their smart phones out checking email, surfing the web etc. You have to buy a card to give you a login and a password onto the network and they are very expensive to Cubans. The idea of a free WiFi isn’t something available in Cuba. 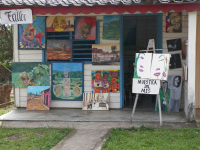 One of our favorite things to do last time was a walk up to La Ermita and have a coffee and enjoy the view over the valley. The walk is up hill the whole way and the first time we did it, it seemed to take forever. Doing it this time was a nice stroll up the hill.

Walked up to La Ermita Vinales looks bigger than it did. Had lunch at El Olivo. Seafood soup and gazpacho both were very good. Lots of people around so we took our time and watched the people. People are always interesting.

The first day we were in Vinales last time it rained hard and we ended up loosing a day because of an all day downpour. This time it isn’t an all day downpour but it is definitely rainy. We were home shortly after lunch to avoid the rain. I caught up on pictures and listened to a Spanish lesson and did a few games of Suduko. I got cold during the rain as I did all of the panoramas and number the pictures. Lots of pictures of lodge buildings so far. Lodge is tomorrow at 9am I won’t make it. 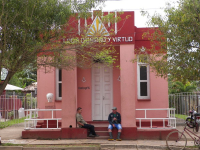 French couple in the room at the front of the house. There are French, Italian, Russian, Brits, and lots of others around this year.