February 01, The east end of the historical walk

Our casa is on Trinidad also called General Portuondo, every street has two names, one listed on the buildings on the street, and one listed on the guides. Some of the guides use one set of names and the other one may use the other set of names. It’s a mixed bag and confusing at best, curse worthy at times. I’m beginning to like the location of our casa more and more. We walked out to the end of our street (UP A BIG HILL) and we were at the beginning of the Lonely Planet’s historical tour.

On our way we stopped at a church that was open. Being Sunday it is ripe pickings to see churches that are normally closed and you can’t get into. This one was open and in very good shape with quite a few people in it. 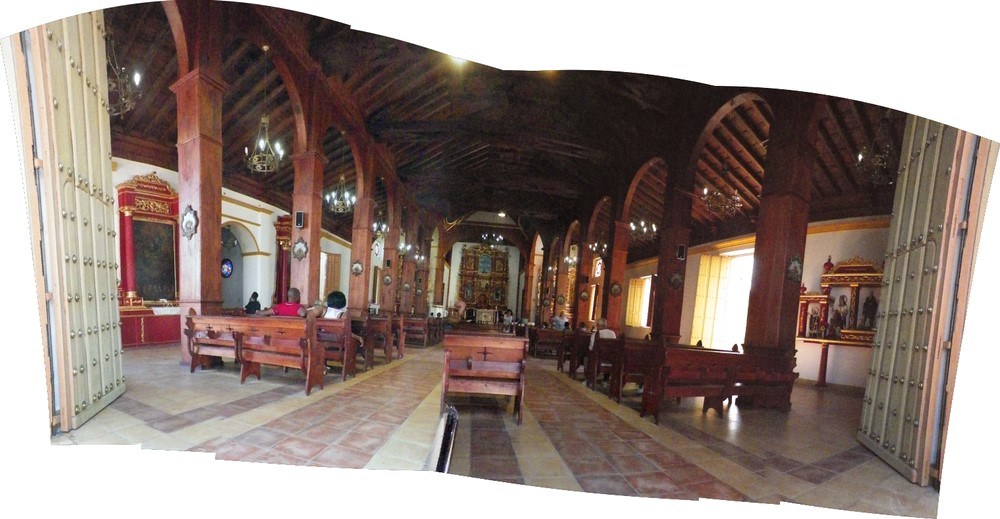 Up from the the church is a masonic lodge it was closed but looking in the crack of the door it was in good shape and active. We walked by a huge fountain. It wasn’t running but if it ever was it would be an impressive thing to see. We took lots of photos as it was on a high point and gave us a good view. 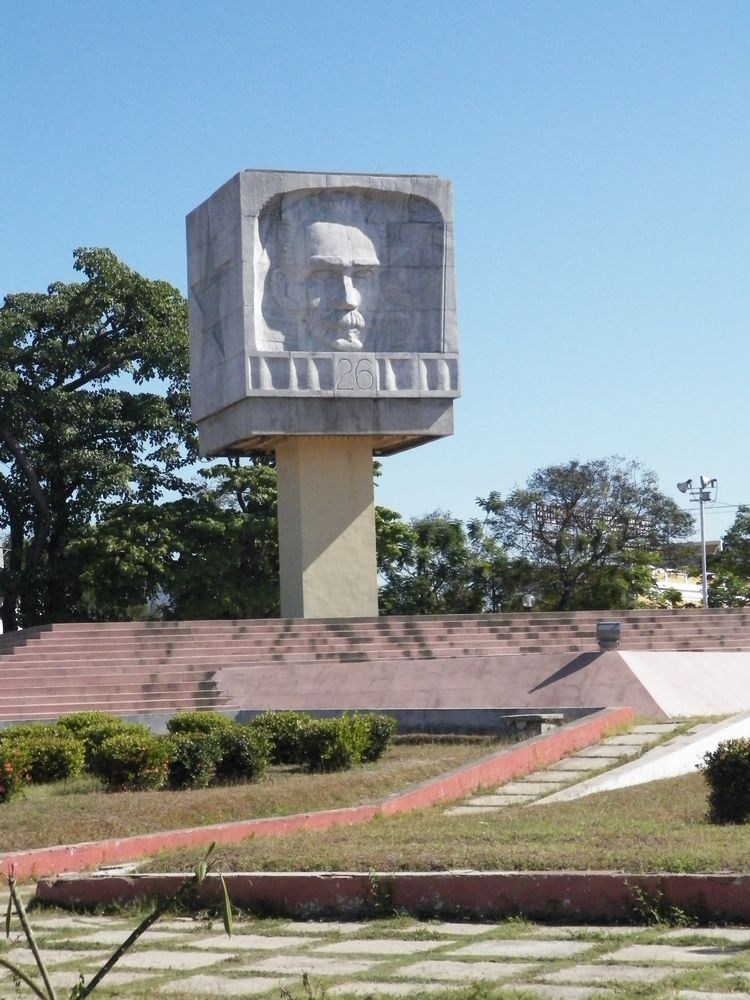 The historical tour starts at Cuartel Moncada. It was the location of the first battle of the revolution Fidel attacked the barracks, Raul attacked the Palacio de Justice and a third guy attacked the hospital. Raul took the Palacio de Justice, the other guy got the hospital but Fidel got his butt handed to him at the barracks and bid a hasty retreat in about 10 minutes. Raul saw things going to hell and got out, and the third guy got caught and executed for his troubles. Fidel was sent to prison and eventually released with the chant of “history will absolve me”. The barracks are now a very large school with one end that is still the museum. The Baptista Regime cemented the bullet holes over and when Fidel came to power they recreated them, without using bullets.

Inside the museum is a wardrobe full of bloody clothes of martyrs to the cause as well as lots of weapons. We didn’t have enough Spanish to get much out of it. There was one nice piece of art work. This was one of the few places that we have seen a exhibition of pictures of Fidel. Almost all of them as an old man. One of his last public appearances in 2012, he’s an old man now.

From the Cuartel Moncada we headed back along the Lonely Planet’s historical path. Along the way there are lots of street murals and interesting buildings. A few of the signs that we weren’t real happy to see were the temperature signs 36C yeah we knew it was hot but I didn’t think it was that hot. The breeze picked up and we saw a couple other signs later in the day that was 31 C and 29 C. It was officially hot at 36C. Bonnie doesn’t do well at 31 and I’m not so great at 36. Lots of guides saying the carnival in July is incredible to see. If January is 36 I can’t imagine what July would be like. 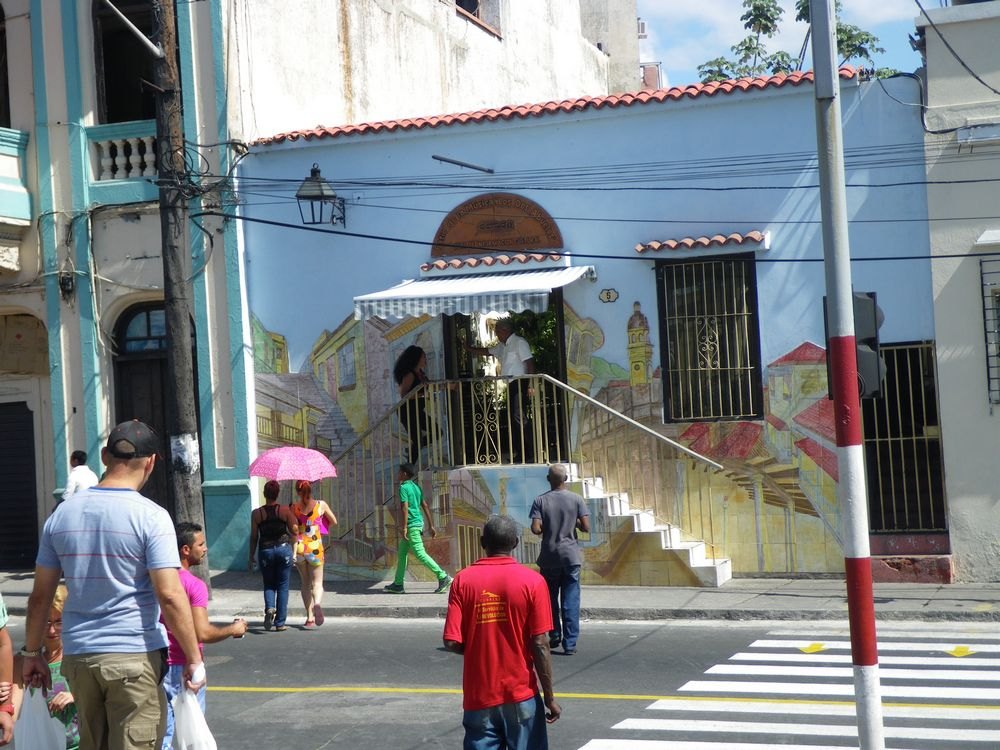 We made it back to Parque de Cespedes and the terrace of the Grand Hotel, the waitress took our order for Mohijos and never looked at us again. We did get her to get us a menu when we ordered the drinks but she never came back I had to walk by her to go to the bathroom but she wouldn’t meet my gaze at all. We left money to pay for the drinks and went to the Taverna El Baturro (I sight read this as Taverna Bacardi and bonnie sight read it as taverna bucanero (the local beer) ) We were the only white people in the place and the only tourist as well. They had a local beer we haven’t seen anywhere else. When I ordered it the waitress looked a little concerned. The two guys at the bar were watching my reaction to the first sip. Hatuey is a little less refined and a lot more malty than the tourist bucanero. It was good enough that I ordered another. We had a mixed salad and what turned out to be a grilled cheese sandwich pannini style two brews and a bottle of water for $8cuc.

We found the Emilio Bacardi (of the rum fame) museum and it was closed for the day so we moved it to the day after tomorrow. We got the casa to book a tour for us which should take most of tomorrow. 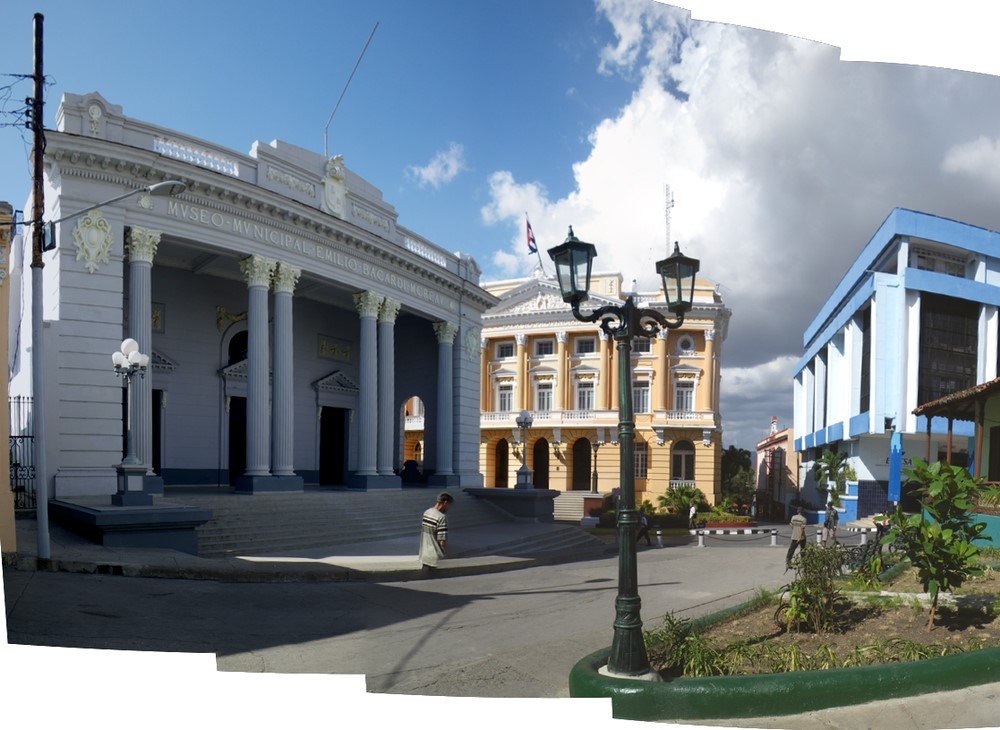 We walked up the street and found the restaurant we were planning to eat supper at. Turns out it is one block further up the street than our last night supper, It is number 2 on Trip advisors top restaurants. We turned onto our street and there was another Masonic Lodge (That’s three on the same street for those that are counting.) There were seven steps up from the street to the front door guarded by two brazen pillars that were well polished and cleaned.

Bonnie crashed and let me have time to work on the trip log, I’ll have to wake her soon or she won’t sleep. The temperature is dropping and we are starting to see others moving around. The square was about deserted at noon.

Trip Advisor nailed it again. We went to Primos Twice. We had a mixed salad a generous amount, two bottles of water, pork steak with fine herbs, grilled fish of the house, (both entrees came with rice and vegetables), two coffees and we split a flan for dessert, $13.50cuc plus tip. The food was very good and the service was excellent. Trip Advisor gets around, there were a group of 5 Japanese as well as us there that mentioned TripAdvisor. This was the first time we have used them for restaurants but considering how well we are doing it won’t be our last.