We started the day with two things in mind, the Emilio Bacardi Museum, and The Carnival Museum. We struck out completely on the Bacardi museum it is closed for renovations and not going to open until June. Strike two was the Carnival Museum. Santiago de Cuba has a Carnival much along the lines of Bahamas’ Junkanoo or the Marti Gras in New Orleans. It is held in mid july I think the advert said 21 to 25 this year. The Carnival Museum was not a complete failure it just didn’t open until noon. So we had a couple hours to kill. 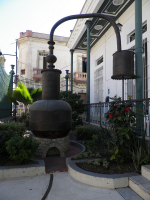 We walked over to the Museo de Ron(The museum of RUM!) It talked about the making of rum in Cuba It talked about the distilling process, the coopers, the bottling as well as the Rum makers from Facundo Bacardi Maso(1886) one of the nice features is a free sample. I must admit I do like the Bacardi recipe better. 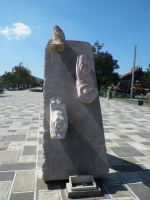 We walked down to Parque Alameda near the waterfront. I was interested in more of a walk and so was Bonnie so we walked along the waterfront. There was a cigar factory and a rum factory. The Cigar factory didn’t have a lot of appeal but the rum factory is always a good thing, (something about the free samples). They had a band playing, you guessed it Guantanamera (Guantonamo girl) I think I hear that song at least 20 times a day, every day I’m in Cuba, I’ve grown to truly hate it. Everytime I hear it, it means money or running the other direction. Since we were in an enclosed space running was hard even though we tried. The musicians were a little pushier than normal and they got a cuc. I’m not sure the free sample of Santiago de Cuba rum was worth it, add the two bano runs and it might have been. I like the real Bacardi much better. The Santiago de Cuba rum is made in the original Bacardi rum plant that was taken over when the Bacardi’s split during Castro’s coup. 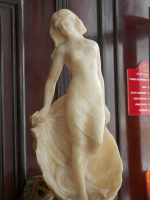 We were thinking about going up to Revolution Square but by the time we got to Marti Ave it was 32 C and we had been walking for almost an hour and a half. It would be about another half hour walk to the Grand hotel for lunch (We had a mission otherwise we wouldn’t have bothered.) We went back for a Chocolate soldier. We weren’t sure what it was but the chocolate is incredible here so we had to have one. It turned out that we needed another rum too. It was hot. 2 Mojitos, 2 bottles of water, a fruit salad, and a chocolate soldier for $12.30 plus tip. A chocolate soldier is a large chocolate sundae with a black belt around the middle, the black belt is a band of dark chocolate syrup. Well worth a visit. The Mojitos there are very good not as sweet as the normal ones at other places but even it tasted sour with the soldier. We walked back along the pedestrian market street where the locals shop and did a bit of people watching as well as seeing what was the going thing for lunch for the locals. I don’t think my dietitian friend MaryAnn would approve. We walked back to the casa and turned on the fan to get a little bit of air moving. We both had a nap.

One of the more useful apps is the Google Translate function. We can actually point it at a sign and the app will translate it for us. It doesn’t work great on plaques and things that are really busy but you can type in the text you want to translate and it works too. If you have an internet connection it can actually do speech recognition as well. Hopefully the need for the internet connection will go away and we would have almost a babble fish (something for the non douglas adams fans to look up).

We went out to supper at the Compay Gallo again and were the first ones in the door but we were quickly followed by two other couples Bonnie recognized them from the previous night. Food was very good but I didn’t think it was as good as the first night. Still one of the best restaurants we have been to in Cuba Presentation of the meals were very good. We shared a flan for dessert, it was served on an upside down plate. Chef Sean would approve. Bonnie was impressed with the professionalism of the waitresses they could have worked at any restaurant in the world. 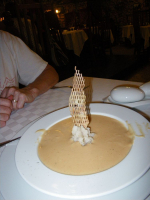 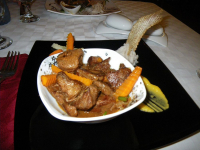 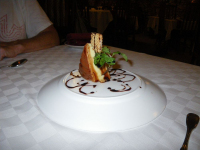