It rained during the night. Our room has louvered windows and is great as air flows all around and we up on the top floor so we don’t have to close things up for security. The fresh air turned into rain so I got up and closed on side of the building and went back to bed, a while later bonnie got up and closed the window in front of the bathroom and the we heard what I thought was one of the loud metal carts with large ball bearings for wheels running down the street. Except it wasn’t it was the rain hitting one of the metal roofs next door. It was raining very hard.

We decided to forgo any tours and stay close to home. We walked around town with me wearing the masonic logo hat that Gord bought for me before the trip. I had a few people look at it but nothing more than an odd glance. We walked up to the hotel overlooking the town and it is just about dead we saw three people that were guests. We got a few good panoramas and then noticed a lot of rain on the horizon so we headed back toward our casa. 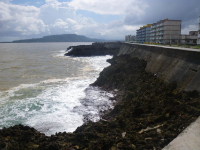 We arrived and started to download and process the pictures from the rain forest trip. The rain came in buckets mostly horizontally with the winds. Not a great drying day for my laundry. The hired girls from the casa had it mostly done by the time we got home at least as far as the wash is concerned. They hung it up on the clothesline in the roof of the terrace outside our room and since the rain was barely being halted from horizontal by the doors, it wasn’t a great drying day. They looked at us and shrugged, Manuana (Tomorrow)

I spent most of the day doing pictures and writing the log. Our sport for the day was watching the cathedral come and go from our view. The mountains really never came back all day. Once the rain closed in the mountains were gone. We could usually see the spires of the cathedral but the clock on the clock tower would often lost in the driving rain.

At one point bonnie suggest that we have dinner in the casa in case this didn’t let up. It was a very good idea as it didn’t and my dry clothes are the ones I’m wearing. And the prospects of the clothes on the line being dry is slim to none. We had supper in her kitchen as the table in front of our room is rain soaked and moving the plates from downstairs to upstairs would have been dangerous in the high winds. They have a teenage daughter who made herself scarce as soon as we showed up. We have seen her a few times doing what teenagers seem to do everywhere. Lay on the couch and watch TV.