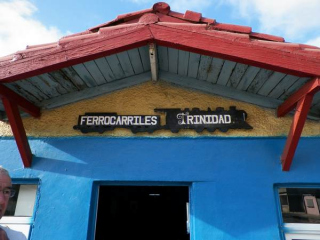 We had to be at the train for 9 am, both Bonnie and I thought it was a shorter walk from the casa to the train station that it was from the train station to the casa, could have something to do with the morning cool rather than the afternoon heat. We were ALMOST the first there, one other couple. Eventually we had a pretty good showing for the tourists although they did undo a car so we only had the engine, the bar car, and a passenger car. The Passenger car was wide enough for a bench with two seats, an aisle, and a bench for one. The train is a POSH experience, not meaning luxurious but Port Outboard Starboard Home, the original meaning. Those on the passenger liners traveling from India to England would prefer Port on the Outboard leg and Starboard on the home bound leg allowing their cabin to be in shade both ways. We would apply the same principle to the train. The shade was worth it. 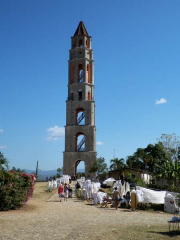 We did a quick walk through the cut-work lace artisans to the tower and did a straight line to the top. We were able to take lots of pictures before anyone else arrived at the tower’s top floor. It was a LONG climb and I was huffing and puffing pretty hard by the time I got to the top. SPECTACULAR view! The tower was originally designed to allow the overseers to watch the slaves at work all over the plantation. BIG plantation. The 360 degree by 60 degree picture, 48 photos in all stitched together to be about a 154 Megapixel file, and 30 megabytes on disk. Well worth the climb!!

We came down slowly and checked out the still operational cane press. No one was around to operate it but it is still working. We went up to the restaurant and had a Mojito, not on the list. Lots of very nice lace crafters on the way up from the train station. We bought a bunch of fresh bananas and had a couple for lunch and then the train took us on to the hacienda where we were supposed to have lunch. We didn’t want lunch and I asked for a Bucanero but all they had was Crystal, not as good a beer. The train moved on while we were at lunch. If I had have known that I would have asked to stay on board. 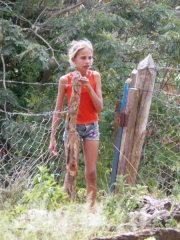 The train stopped at a small house along the way and we couldn’t figure out why until two farmers came out of the house and onto the train, they went to the bar car, got a bottle of rum and a couple of drinks and we were off again. Just delivering provisions to the locals!

There are lots of agricultural land being reclaimed, we saw two brick factories, farms, livestock, etc. Back to the casa for a siesta and a spanish lesson. We downloaded all of the spanish lessons and the text for the lessons onto Bonnie’s tablet for the trip and we do a spanish lesson during siesta if Bonnie or I aren’t sleeping. We had dinner at the casa, fish a little oily for Bonnie but still not as oily as some places. Food in the casa is very good, low salt, normally low oil, and huge portions, a veggie plate, fruit plate, water, a rice dish, a meat dish, and a dessert, prices are all very reasonable. If given the option we ask for Cuban rice really good stuff.