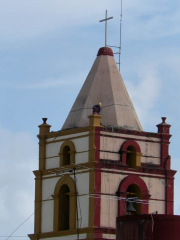 We had breakfast and watched the painters start back at the color change on La Soledad. We were off to the Viazul bus station to get tickets and travel to Santa Clara. We should have waited and got tickets when we arrived but we didn’t, and now we are paying for it. As more and more people arrive we get more and more stressed.

The bus was late arriving and late leaving. We met a woman from Montreal who comes to Cuba a lot, almost any serious festival anywhere in Cuba she is there. If we can’t get on the bus then the three of us were going to share a communal taxi to Santa Clara. Fortunately Viazul worked and everybody got on without a problem. As always the person with the mop controls the bus station. She shutdown the Viazul Bus loading area to clean. 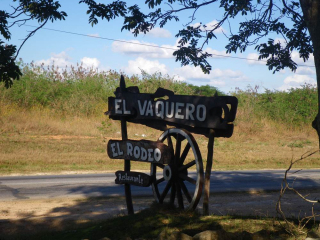 Oasis, the restaurant we stopped at on the way to Camaguey was full so we went on. We stopped at a couple of stations for the 5 minute bathroom break. We stopped at El Vaquero El Rodeo Restaurante for lunch. Bonnie and I had an ice cream and a bathroom run. Drivers had a huge meal and were very late leaving. All of the passengers were milling around waiting for the drivers.

We went over and looked at the stadium. It has a setup for a real rodeo, gates for loading bulls and horses, stands with lots of seating.

The last casa didn’t say anything about having a taxi meet us so our Canadian friend and us were going to share a cab, we were just arranging it when a guy stuck a “Michael MacDonald” sign in our face, we followed him and we got to Casa Ricki no problem, 3 CUC. We paid up for 5 nights, breakfasts, and supper tonight. We had the shrimp, and it was very good.