When we got up it was raining a little and threatening worse so we jumped at the first break in the rain to walk up to the bus station. We were several hours early but the timing sucked no matter what so we bit the bullet and waited. I took the opportunity to do a little work on the log and pictures until the battery died on the netbook. While we were there the German girls from our tour showed up and made reservations for getting out of town the next day. They came over and said thanks for taking pictures for them and to say goodbye. We waited and waited and waited and the bus showed up on time It made it over the mountain, this time without repairs. The same crew was on and one of them recognized me and said hi. 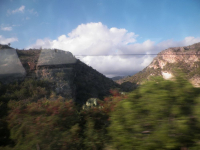 As always I take lots of pictures from the bus window and although very few actually turn out I do manage to get a few interesting ones. I did have a bit of success taking movies out the window. 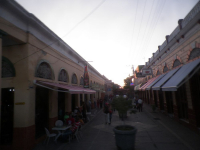 It was interesting that the whole way back the bus drivers stopped at almost every fruit stand and bought fruit. They have to have a deal to supply a fruit stand in Santiago de Cuba. They bought far more than any one family (or five for that matter) could eat before it went bad. 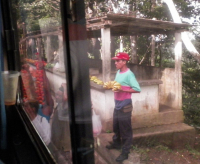 They completely cleaned one lady who had buckets of mangoes to sell. Five buckets of mangoes for 4 CUC. Good deal! It was interesting to see all of the locals on the bus doing much of the same only in quantities for a family. Bananas, tangerines, mangoes, and other tropical fruits were popular.

We arrived in Santiago de Cuba and the casa we were staying at was a fair distance from the last one on the opposite side of Parque Cepesties. We arrived and Bonnie was disoriented this trip. I was finally able to get my bearings and found our favorite restaurant by the time we checked in and got oriented and got to the restaurant it was packed and with out a reservation we couldn’t get in. So we walked over to Primos Twice and had another good meal there, Bonnie was very tired from the trip and we were happy to get to the casa and get to bed.