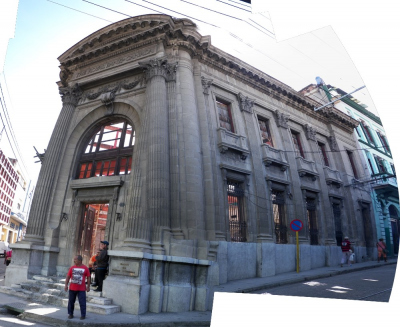 Our first trip for the day was to get bus tickets. It took several hours last time so we weren’t looking forward to the job. We walked down from our casa and came across a Royal Bank of Canada building that was in the process of being completely gutted and restored. The old building had class. We walked out and found the bus station without even getting lost. We got in line and as lines go in Cuba. There can be twenty people standing around with no apparent pattern but everyone is in line. When you walk in you ask Ultimo? (Who is at the end of the line?) Someone will put up their hand and then you follow that person. You might be second in line and there are just another dozen hanging around talking or you could be twentieth in line you never really know, just follow the person who was previously Ultimo. It’s a bizarre system and most frustrating especially as some people will disappear and then reappear and be in the middle of the line again. It is really tough if your Ultimo leaves and doesn’t tell you who their ultimo was.

Across the square from the bus station is the revolution square the giant figure on the horse is Antonio Maseo at the base of the statue is a museum to him. He was a giant figure in war for cuban independence and was shot an unbelieveable number of times, 24 I seem to remember. They had a neat topographical map of Cuba and an English presentation and slide show on a computer that projected above the map and a slightly bigger than life sized picture of Maseo. A light would come on on the map to show where the battle was and if he got shot at that battle a light would come on to show where he was shot. One battle he was shot like four times and then three days later he was in another battle a good distance away and he would get shot again. I’m thinking the bullets must have had very little powder behind them, or the story might be being stretched just a little. One incredibly neat thing was that most of the “artifacts” at the museum were actually holograms of the actual article. The holograms were very impressive. The items had very good detail, one ring was so clear that you could see clearly the masonic crest on it. 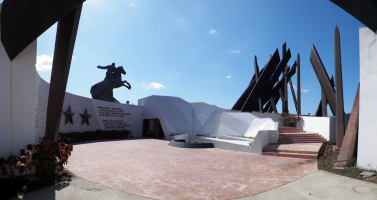 We came out of the museum by coming out the top of the museum and down the staircase. We took a bicycle taxi $3cuc back to the Rumba Cafe and had two cappuccinos, one cafe cortadito and a pesto pasta with garlic and “aromatic” herbs to share as lunch for 8CUC. It was excellent if a little too much olive oil.

Our casa this trip is a lot more like a hotel than a casa so it misses a little of the feel, and is more expensive but the room is bigger and the eating area much fancier. It was covered in butterfly Jasmine, complete with lots of bees. The foyer was a nice mural (some of it 3D to hide the power wires etc) Bonnie was quite impressed with it. Most of the windows were actually not just painted but were raised above the level of the wall. It was nice.

After a little siesta we were out on the streets again and we were early enough to the Compay Gallow that we were able to get in. We had run into our waitress in town a couple hours earlier and she had remembered us from the previous week. She was surprised to see us again at the restaurant that night. She was a very good waitress,

Bonnie said she could easily work at any 5-star restaurant anywhere. I certainly liked her. The food was top notch again. We had one meal the same as last time and one new. The same dish was presented completely differently. But it was just as tasty. 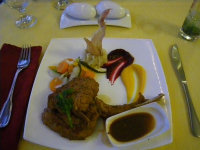 I had the Cowboy pork chops and I have to admit I wouldn’t have it again. It was good just far behind what our other three selections had been. We did have two desserts the Flan (again) and the Tomato. Bonnie wanted to try a tomato as a dessert just to see what they could do with them. It ended up being a candied tomato with the jelly from the canning process filling the martini glass level with the candied tomato. (Date squares would be sour compared to them, and I find date squares too sweet to eat usually. The second waitress arrived with a bottle of good rum and poured a spoon full of rum on top of it, to give it a bitter tang, the fancy curly yellow spiral sticking out of the top of the dessert was actually crackling (salty fried pig skin), sweet, bitter, salty, and fat all in the same dessert. It did weird things to the taste buds.