February 12, 2014 The train museum, the Che with child statue, coffee, and the theatre. 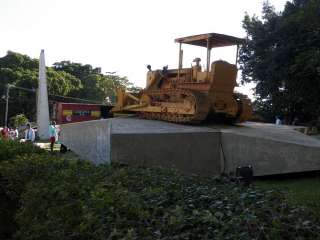 When Che and a band of 18 men borrowed a bulldozer and with Molotov Cocktails derailed and defeated a heavily armed train with 350 soldiers on board, the Batista regime was toast. And so goes the story. The boxcar museum celebrates the place where the train was derailed, even the bulldozer (a Caterpillar D6) has it’s own pedestal. There was some kind of celebration going on while we were there. We watched for a while but when the podiums started to get set up for the speeches we left and headed toward the smaller Che statue just a short distance from the Boxcar museum. If you continue walking away from town you will walk right by it. It’s not very far from the Boxcar Museum, it is small, life size actually, and you could walk past it. 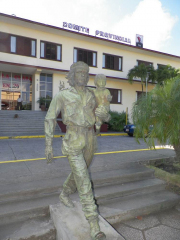 The smaller Che statue has a child on his shoulder, representing future generations. It also has many tiny sculptures within the statue, including the likeness of the 38 men killed with him in Boliva and buried in a mass grave. We spent quite a while looking at all of the statues within the statue, it would be interesting to know the story behind them all. The small Che statue is a must see. The figures that we noticed within the statue of Che carrying the child include: A child on a goat on his right shoulder; a person hiding with his arms wrapped around himself under his right arm; Sun shining on a drawing of him on horse with a spear and shield on his pocket; The 38 men emerging from his belt buckle; 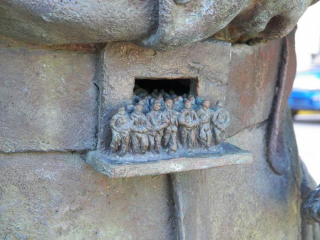 and infinity symbol with (I think) people on it, on his left front shirt pocket; Something in the hand of the child, after looking at a dozen photos of it I still have no idea what it is; The people in the hammock hung in his hair; The knife wound in his back; The portrait of a child suckling it’s mother with two smaller children in front of her; The girl looking out a window under his left arm;

Mountain climbers climbing his left pants pocket; A group of people with a horse on a narrow path up his arm; A man on a bicycle on his pant leg; a “vitoria” with a few squiggles on his belt; and the cuban cigar in his hand. 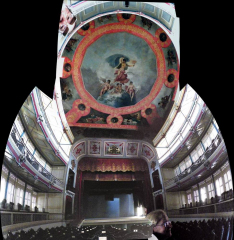 We walked over to the tobacco store for a coffee, Bonnie wasn’t interested in a tour, we had a really good tour in Pinar del Rio. When to the Cafe Literario for another coffee and then to Hostal Restaurant Florida Center to book us in for dinner. From there, we went back to the square and toured the theatre, and the church, and people watched in the square until supper. 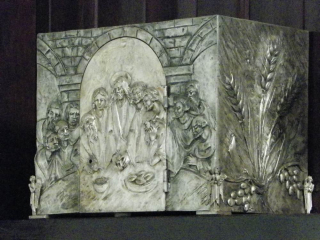 When we were home for siesta Riki wanted me to have a beer with him for his birthday. We talked for a while and he was depressed, he was 44. He told me how to do a cuban toast. “We have five senses:We hold the glass out to each other for the sense of touch; We hold the glass to the light to appreciate the color; We smell the liquid to appreciate the aroma; We touch our glasses together for the sound; and only then do we taste the liquid, and wish to each other’s health.” 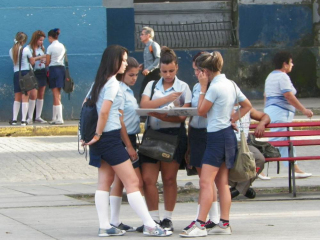 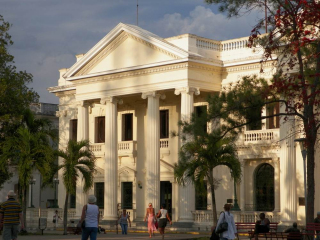