February 12 An early escape from Santigo de Cuba and arrival in Bayamo. 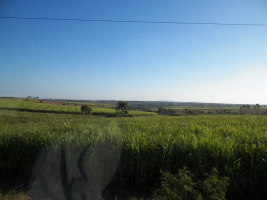 We had to leave our casa at 530 am so we were the only ones up leaving the casa. I opened the door at 520 and the taxi driver was waiting so we were early leaving. The trip to Bayamo is short so we arrived at the bus station at a reasonable time. We even had a little bit of success taking pictures out of the window of the bus. 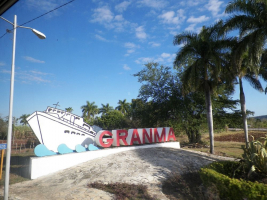 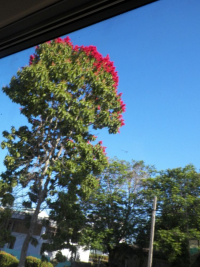 Jose the casa owner was there to meet us. He pointed us to a bicycle taxi and said he would meet us at the casa. He passed us on his own bicycle a little while later. Bayamo is bicycle central. Everything is pretty flat and the bicycles are great to get around on. We were in a traffic jam at a light that had nothing but bicycles in it. We made it to the casa and Jose made us breakfast. Jose’s wife doesn’t do English but we have made out ok so far. We waited for the people to check out of our room while we were having breakfast and before long they had our room ready for us. We dropped our luggage and went out for a little walk. 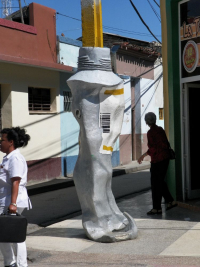 We are basically two blocks up from Parque Cespedes the major square of the area. A while ago they took one of the streets off the square and turned it into the pedestrian shopping area for Bayamo. It is full of restaurants, shopping, and the odd museum and art gallery. The far end of the street has actually become very much the art area. The light standards/power poles have been wrapped in art. 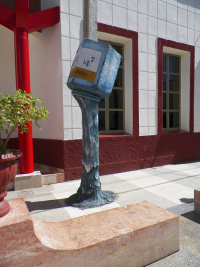 The distant end are all “Tolken Trees” as Bonnie puts it. The mid section are aimed much more at the artists they are wrapped in paint tubes, paint brushes, paint pouring out of a bottle. The art doesn’t stop at the light standards. 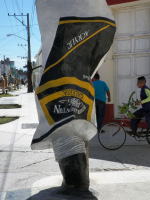 There are many mosaics built into the floor one reminded me of an Escher sketch. There were flowers as mosaics, a beach scene and lots of stuff. The park benches were even artistic stone carvings with places to sit into. One seemed particularly shaped for my butt and was practically as suction fit. 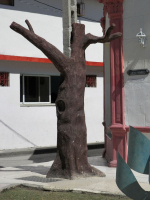 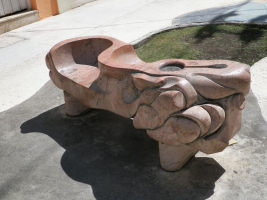 We went to the wax museum and most of the people there are music related. People that didn’t mean a lot to me as Cuban music is not really my genre, they did have one name I did recognize, one was Benny More. The others I recognized were Jose Marti, Ernest Hemmingway, and the hometown hero Cespedes. Cespedes was the only one wearing a Masonic ring, although Marti was a well known Mason as well. 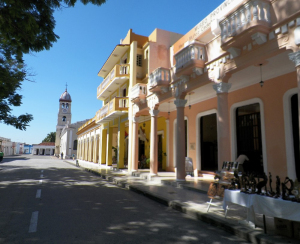 We walked down to Parque de Hino to see if the church was open. It is supposed to be something to see, it wasn’t open, but the Bodega was, We had a couple of mohitos and a mixed salad for 9.70 cuc either they have selective pricing or the price was exceptionally expensive. We on the back patio overlooking the Bayamo River. There was a guy cutting grass for the horses and we watched him while we waited. The view and the breeze was nice.

Walking along the riverfront later there was a small park where they had Tolken style park benches. We heard the bells chiming in the church and turned back on the chance that it was open, it wasn’t but we got a few good pictures There is a large bell that has a crack similar to the Liberty Bell in the United States, apparently liberty bells everywhere are broken. 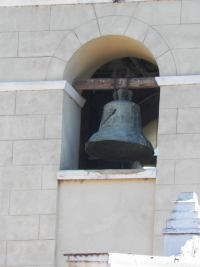 Bayomo’s war hero is Cespetes he was born here and attacked his hometown to free it from the Spanish and when the battle started to go against him and the Spanish started to retake the town the townspeople burned the town rather than let the Spanish have it. There is very little of the pre-1860s town left, one of the buildings is Cespetes birthplace. There is a museum there and the museum is worth a visit. It is full of furniture dishes and memorabilia from the era, including a certificate given to him by his lodge for services rendered.
There are a huge number of German tourists visiting the area. We sat in the square and did a lot of people watching. There were five or six different guided tours go through the park and they were all German speaking guides giving the talk. There is still a lot of beautiful buildings around one of which is the hotel we went in for coffee and a bottle of water. Two coffee americanos(.60 each) and a bottle of water(1.50) was 2.70 The coffee is incredible here.

We went back to the casa and had a siesta ( I worked on the log and bonnie had a nap) before going out to dinner. We had four places to try from trip advisor. The number one place was the Barberan We went and had the pork in a red wine sauce that was so good at the place in Santiago de Cuba and a garlic herbed chicken dish. Both were nearly inedible. The red wine sauce tasted pretty good but the meat was terrible. The chicken was fat and greasy beyond belief. The rice was so bad that we left it on the plate. It tasted and had the texture of rice that was made the day before and left out on the cupboard to dry. We both rated it as the worst meal we have had in cuba ever. The Bodega was one of the others with it’s very expensive prices it was off the list as a possible return. Two of our top four checked off the first day, things are not looking good