February 13 No tickets, almost a museum, and a good restaurant 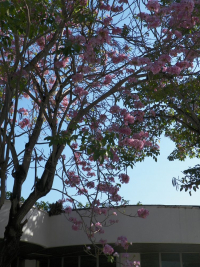 Our first job of the day while it is relatively cool is to head up to the bus station to get tickets out of town. We walked up the bus station and the Viazul office was not interested in giving us a reservation to Holguin. Viazul really is starting to suck. The system they had before seemed like they were running as far from a reservation system as you could get. They were printed by hand in a book and if you paid in advance they gave you this tissue paper thin piece of paper an inch by two inches that was best described as fragile at worst akin to the ultra thin Cuban toilet paper. Try writing on your toilet paper at home and see how far you get. The system they have now is a computerized based system that will print out real tickets and uses real paper (perforated paper on tractor feed dot matrix printer no less). They take your ticket and then generate an honest to God boarding pass similar to what you get on an airplane, seat assignments and everything. Mind you none of the seats on the bus are numbered and if they do happen to be numbered look nothing like the numbers used on the boarding pass. It’s still a grab a seat if you can and go. The system is bad enough that finding a ticket agent that is willing to sell you a ticket is rare. They would much rather have you wait until the last minute see if there is any room on the bus and go directly to the boarding pass. It works ok as long as your passengers don’t have reservations anywhere or have to worry about getting anywhere. 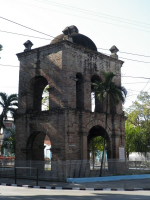 Bonnie and I have weird sayings that we use every now and then that makes sense to us and no one else has a clue what we mean without a very long explanation of it. We now have another one. Cuba is a place that defies description, or should we say a single description. There are lots of times when you look at something and think “Man that isn’t ever going to work.” it does. The Cuban people are living in a communist system and for the most part runs on private industry and commission sales. All the old American cars you see are, if you open the hood, or sometimes even just the passenger door, it really looks a lot like a Lada. One of the best restaurants we have ever been to in any country has five tables, that’s all it has room for and most of the tables are tight enough they can’t actually seat four, they’re set for three. It isn’t a new restaurant either, it’s been around a while. Some of the portion sizes on some of the meals even exceeds the huge portion sizes in Canada and the US. Bonnie and I are now at the point where we order one meal and split it. If the portion size is too small we will either order two desserts or another main course. We’ve never had to order another meal but have gone for two desserts. In a country where most of the food is laced with sugar, restaurants often don’t have any desserts available. A police force that obeys the same traffic rules as everybody else (when was the last time you saw a cop car in Canada or the US obey a stop sign if there isn’t any traffic). A communist state where the work ethic that is encouraging to see, if we had the same ethic we wouldn’t have nearly the economic issues we do. A country that has been living under a communist dictator for over 50 years, Fidel is criticized for some of the things (SOMEWHAT openly) he has done(mainly the pact with the soviet union but some say that he had little choice given the political situation he was in; censorship is another, access to the internet another, political suppression is another), other things he has done is truly appreciated (the free health care, the education system free through university level, free nursing home care for the elderly), but for the most part is held with some affection in the heart of most Cubans. I can go on and on about the contradictions that are a daily practice that you get to live with when you actually go off resort and into the homes of Cubans into the Casa Particulars as they are called. The constant contradictions that you live with here have generated our new expression. Just when you start to get a handle on something it changes before you can look at it. It was as if you reached out and grabbed a bird out of the air. It was flying by, it felt like it had feathers, but when you open you’re hand, you’re looking at a frog. 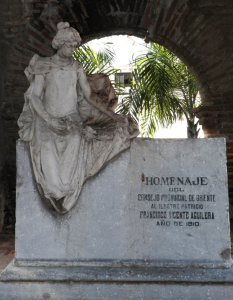 The failed attempt at a ticket discouraged us a bit. Next year if we come to Cuba we may do the online reservation system and bypass (for the most part) the frustrating Viazul ticket agents. We left there and headed toward the Parque Retablo de los Heroes. Bayamo was burned by it’s own citizens and one of the monuments that survived or was rebuilt from the ruins was an arch that covers the remains of one of their many heros, Francisco Vincente Aguilera They have a reverence for their national heros that is comparable only to the reverence Americans have for their national heros. 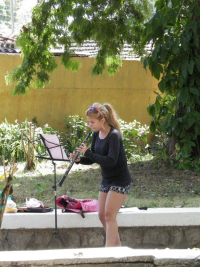 We walked from there to the Museo Nico Lopez, we could walk the grounds but couldn’t go into the museum. They didn’t have any receipts that they could issue for CUCs only for their Nationals. Since they couldn’t issue a receipt we couldn’t go in. The girls didn’t want to get in trouble for selling us any nationals. We could walk around all we wanted but not the museum part. Since it was most likely all in Spanish we probably wouldn’t have gotten that much out of it anyway. We did love the grounds. If you get a chance to visit it is well worth it, even if you don’t have any nationals. As we walked around there were two young women practicing their music, a flute and a clarinet. It made for a very pleasant visit.
From there we walked down to the Bayamo River and looked at the river and the little park that sometimes has a lot of farmer’s markets open and busy, unfortunately today is not one of those days. We walked back to the casa and arranged for a visit to the Botanical Gardens via our casa and had a bit of a siesta.

We wanted to give the TripAdvisor.com restaurant suggestions one more try in case their top rated restaurant just had a bad day. We were not willing to give them another try but did go for the next one on their list. The Palador el Polinesio (I’m not sure any of the menu items had anything to do in any way shape or form to Polynesia). Their first strike against them was not hard alcohol so no mojitos. Things were not looking good. The waitress spoke pretty good English wish was very nice, our Spanish is not getting that much of a workout. We are getting by with pointing to things on the menu. We know most of the big things like pork, chicken, seafood, fish, beef. We might not get the sauces right but we’re usually fairly easy to please. The Polinesio completely redeemed itself with the food, it didn’t rank with the best of Santiago de Cuba but it was very, very, good. Ok TripAdvisor.com you get another chance. 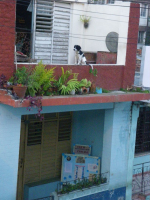 Bonnie has been noticing that the rooftops are the domain of most of the “owned” dogs. There seem to be lots of free running dogs as well but the ones that seem to have a home have the run of the rooftops. We had a cute little dog run down off the roof and appear at the second floor balcony to watch his friends playing on the street.