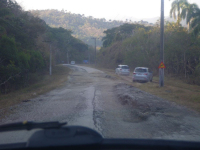 We were up early, we had breakfast scheduled for 6:30, pick up by the taxi at 7. We set the alarm for 6 and opened our bedroom door at 6:25 to complete blackness, at this point we didn’t expect to have breakfast. But one thing we have noticed is that if you are walking anywhere near a trail a farmer will appear bearing bananas, tangerines, oranges, guava, mangos, and even the odd pineapple will show up. We could probably scavenge breakfast along the trail. About 6:40 our casa owner arrives in her nighty “Lo siento, una momento.” Her husband appears and frantic kitchen activity occurs, we go downstairs about 6:55 well fed and coffeed and headed to the mountains. 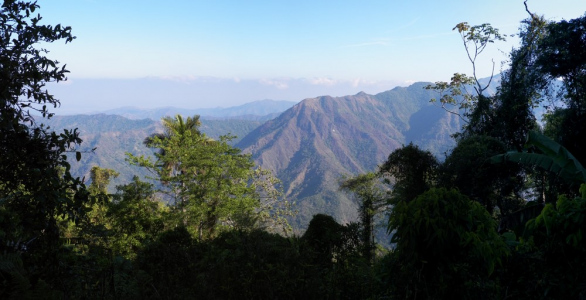 Castro landed his invasion force not far from here. Of the 81 that left Mexico, 12 survived the landing and the assault by Baptista Forces and were split up into groups during the landing, at one point Castro was a commander of three, himself, a soldier who had disposed of his weapon, and a guy who lost his shoes, the locals managed to find them all and hide them in the mountains. He spent about six months in the mountains growing support and about 2 years later rode into Havana as the new leader. 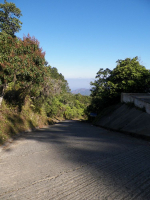 We were headed into the mountains to see where he had lived for those six months. The trip itself was uneventful. The road went from flat as a pancake to serious mountains as we approached Santo Domingo. The taxi driver asked if Raul was available but he was on the mountain. We got bunched up with another group and we ended up 8 in an MG four wheel drive van, I was able to get in the front seat and drove 5 km up (we gained 750 meters in height in 5000 meters in length an average grade of 15% with 45% gradients near the top at Alto del Naranjo ) given that there were 9 (8 plus the driver) of us in the MG I was fairly impressed. From there we have to walk another 3km into the hideout and 3km back.

Rather than fill out all the paperwork for each of us the Ecotour operator just filled it out once and wrote 8 on it and handed it to a woman and said “Your the boss” problem was the woman had no English at all and had no clue that she had all of the vouchers for our taxi ride, entrance to the park, and our lunch afterward as part of her paperwork. She and her husband inherited 6 kids, two from Holland, two from Peru, and two from Canada. She was, I think German. The trip up the hill was really amazing the camera just could not get the angle of the road and do it justice. The parking lot at the top was very pretty and lots of panoramas got taken. The walk was near as hard as the two day hike that the Dutch kids had done previously. They did the two day hike into the mountains with Raul earlier in the week. It goes from the parking lot to the top of the highest mountain in Cuba and back. There is a three day version that takes you to the top of the mountain and out to the coast but it wasn’t clear that they were going to do that one. We were happy to hear at the end of our tour that our tour had better vista views than the other one. We had some incredible vistas to see. 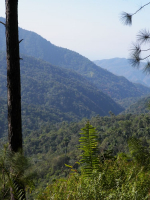 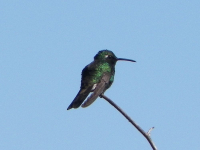 Our guide, George was very good. He knew his history as well as Spanish and English with a little German as well. He was able to tell us a lot about the history of that part of the conflict and it was interesting to see and hear. The views are truly incredible. 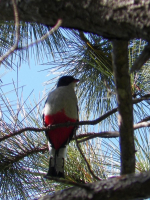 I was able to get the front seat again going down hill and videoed the top 7 minutes of the down hill run from the parking lot. The camera doesn’t capture the true pitch of the hill but it does have lots of beautiful scenery, if you ever want to see it let me know. At over a gigabyte I don’t think it will make it to the web. 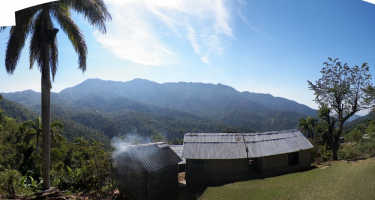 From there we were down at lunch. The restaurant that served up our lunch must be used to groups getting broken up because our lunch was consumed by the time our vouchers made it back down the hill. Our group got broken into two pieces and the vouchers were in the trailing group.

We met Raul taking to our taxi driver and he asked if he could get a lift 20km down the hill to his house. Our taxi driver was a friend and didn’t want to ask us but if we didn’t mind he would be happy. We were happy to give him a lift. We got a good chance to talk and he was named after Raul Castro and was borne the year of the Revolution, He and I were almost the same age. The sun ages you down here. We asked him about a big lake that we could see, It was a hydro electric damn. The house he grew up in is at the bottom of the lake. They were happy about that. His family was given the same sized parcel of land and with a better house and better land than they had before the damn. He gave us a bit of history as we drove but we were quite happy to relax in the ac of the car. A 6km up and down dirt paths through tropical rain forest is a long hike. We loved watching out the windows and seeing the scenery. 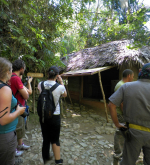 We were back to the casa and went out to the San Salvador de Bayamo Restaurant across from our casa One of the trip advisor places and it had all of 5 tables and the food was very very good. We were back to our casa and packed up ready to go to Holguin.