We woke Elisa at 8:30. Pepe got a call late last night and had to go to his parents house to help them, their fridge had died. So Elisa was holding down the fort. She normally doesn’t do a lot of cooking, I think, Juan may have been recruited to help.

Elisa and Pepe had a family picnic with friends from Havana in the afternoon. 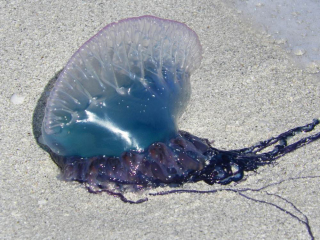 We did a LONG walk on the beach. The cold front coming was driving Man-o-war jelly fish ashore. We walked carefully around them, and came out in a resort near the Don Quixote statue. We didn’t realize we had walked that far. We shopped for cigars at the official stores on the way back. We met up with the girls from Camaguey in Varadero. They are leaving for Argentina the same day we are heading back to Canada, but they are heading out of Havana. 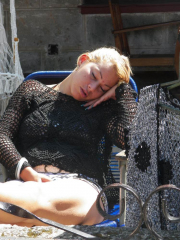 We stopped at Parque Jasone looking for a Mojito that A friend of ours recommended, “The Cave restaurant at Parque Jasone has the BEST Mojitos”, knowing Steve it would have been an exhaustive sample so we had to try it. But it was never open for the three days we were there. We did settle for the best Pina Colada ever!

We walked back to the BBQ restaurant, had chicken and Pork, both good. We figured we walked close to 150 blocks that day. No wonder we were tired.