February 17, 2016 The National Theater, Hotels, COFFEE, and just walking around 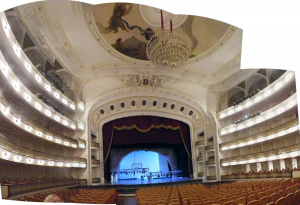 We walked around to the National Theater. On our way we stopped at the number two place on our list of restaurants. We looked at the menu and it had definitely had a “Trip Advisor recommended” bump in the prices. Prices were similar to what we have at home only in CUC which adds a 40% surcharge this year. So we decided to find the next place on the look at. The number one restaurant meals are priced at about 50-60% less than then number two place. Havana 61, our number one was listed as #3 of 609 restaurants in Havana, Ivan Chef Justo was #22, 5Esquinas Trattoria was #31, and Donde Lis Restaurante & Bar was #46, all with in a short walk of each other and not far from our casa. Havana 61, 5Esquinas, and Donde Lis were all comparable in price and the food was EXCELLENT at all of them. 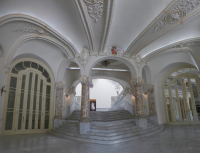 We did a tour of the National Theater. It was closed when we were in Havana three years ago and it just opened in January 2016 so it is still bright and polished. The beautiful upstairs ballroom was amazing. They have performances on Friday and Saturday nights so no performance tonight. The guide walked us around and her English was ok but the other people on the tour were German and she was very fluent in German. The guy was fluent in English and wanted her to do the tour in English for us but she wanted to practice her German. There are more German tourists this year. Lots of Europeans around this year. His wife is actually American they live in Germany. 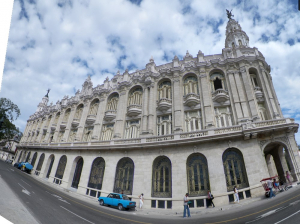 I wanted to check out the price of Coheba blacks at the tobacco shop in Havana. The locals are very aggressive at trying to sell you “GOOD DEALS” on cigars to the point where you have to push your away through them to get into the tobacco shop.

We went in and looked around a Coheba black roughly the size we bought in Vinalies will set you back $17 CUC each! To get there you have to walk around the back of the Capitol building. 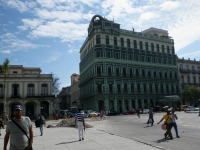 We walked all the way around the the capitol building and one of the buildings that was looking a lot better was the Saratoga Hotel bright green and very spiffy. We went in and up to the rooftop bar and looked at the prices, VERY Expensive so we just took lots of pictures and left. They had brand new Hyundai elevators complete with a smart screen with weather information on it. Probably the smoothest elevator we have ever used.

After the tour we walked around a lot of the old streets and walking up O’Reilly we were overtaken by the pervasive smell of COFFEE.

We could smell Cafe O’Reilly long before we got to it. The roaster was going and the whole street smelled lovely! We had to stop in for a brew! It was also closed for renovations when we were here last time. We would not have been able to miss that smell when we were living up the street for a week! 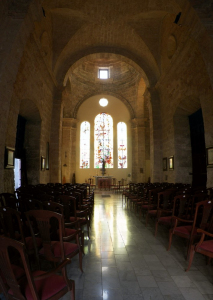 From there we walked around and didn’t do a whole lot but visit the city. We noticed that a church was open that we had been in before. Bonnie remember the beautiful windows so we went in for a look. It is now a performance art space rather than a church and there was a musical group from Tennessee setting up for a rehearsal. There was “the leader” of the group from Tennessee, a gentleman from Connecticut, and a younger woman from California. We talked with them for a long time and they invited us to the performance that night. 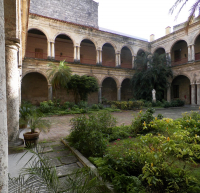 Before we could leave they asked me to help move the organ. Which the Cubans got a kick out of. We wandered around and found a door open to a fancy looking building so we went in and looked around. It turns out it was (we think) the bishops residence. Nice place and the staff seemed very happy to let us wander around.

We wandered around and then went to Donde Lis for supper. The octopus appetizer was incredible! It was a good as anything we had in Greece. The main course of chicken and pork were excellent as well. 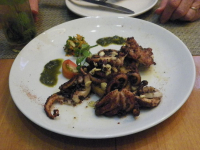 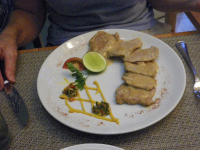