February 17th Nicole, a long line and a great restaurant.

We were sitting at the breakfast table beside the phone when it rang. The owner of the casa answered and handed the phone to me. It was Nicole. My stepfather John, 92 had had a heart attack, not serious but anything at 92 is serious enough. I told Nicole that we were planning on hitting the internet cafe in the morning and trying to turn on the roaming on our cell or hitting the Cubatel office and try to get a simm card for our cell phone. We bought an unlocked quadfrequency international phone when we were traveling, we have simm cards for it from the Bahamas, the US, and Canada. Cuba would not be a problem for the phone, if we could fight through the paperwork. Locking horns with Cuban bureaucracy is a loosing battle at the best of times. Either way by the end of the day we were aimed at having texting ability. We would send her a text when we knew what route we would have available.

We stopped at the internet place and slipped in. The person there understood English, great! His system that would let me buy an internet card was down. OK bank time. We hit the bank and were out with cash in my pocket within a few minutes, a record if ever there was one. We hit the account hard so we had lots of options if we needed an escape plan.

We had time before we could check at the Internet Cafe so we stopped in at an Art Gallery that we had walked by a couple of times. There were a lot of interesting art. There was one piece that stood out above all others. It was almost all shades of black of different styles and types of paint. It completely changed as you walked around it. With permission, we took lots of pictures as we walked, the camera does not do it justice. Ken would LOVE this one. 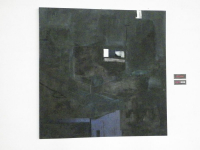 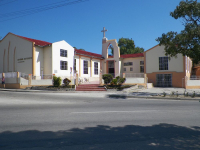 We walked back to the internet cafe and stuck my head in through the line he saw me and shook his head. We walked down to Caraterra Central and turned right toward the bus station past the Methodist Cathedral. We were at the bus station and looking around for the Centre de Negocious when we finally found someone that knew what we were looking for and pointed us in the right direction. If we had headed left not right we would have stubbed our toe on it. We joined the line and four and a half hours later got INSIDE the door. It took another 20 minutes but were able to get one of the fresh sales people just off her lunch break to help us. First we didn’t have much success. She had little English and we broke out the tablet. Google translate (OUR BABBLEFISH) was downloaded on it and We passed it back three or four times. She was having fun playing with it and we were getting somewhere. We walked out of the office with a working Cell phone and thank God we tried it before we left because we found out that we have to prefix all of our phone calls with 119 to get the international exchange followed by our country code and our phone number so our phone number is 119-1-506-474-2484 not our usual 1-506-474-2484 as we are used to. Before we left the office we had a message sent successfully to Nicole. Nicole was able to send us a note back and things were looking up. 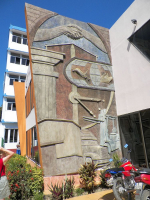 We walked back to the casa and after 4.5 hours in the Cuban sun we were ready for a drink and a bano run. Considering that we had no lunch at all, an even earlier than normal supper was in our plans.

All in all things were working out ok. We hit the next restaurant on our TripAdvisor.com list and hit a gold mine. It is a little further away than the first one but we walked in and it was all dressed up and looking swanky. We thought we might have walked in on a wedding reception but it was just their normal dressed up fair. We found the music too loud so they moved us to a new table and the volume turned down a bit. It was fantastic. The food was amazing. New pictures for our chef friends Dan and Sean. We have been doing very well splitting all of our dishes and only ordering one appetizer, one main course, and one dessert. The chef that flamed our pork looked a little nervous that he only had one dish to prepare but the waitress nodded, it was right. 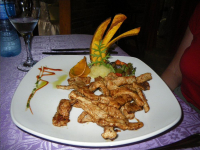 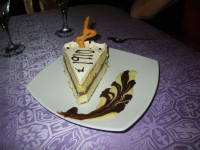 We had the onion soup, the pureed vegetables (bananas, potatoes, yucca, sweet potatoes, and squash), the pork strips flamed with white rum and perfumed with pineapple liqueur and the 1910 Delights ( a cake made of the top three desserts on the menu, Black Delights, a chocolate cream filling, Cheesecake, the bottom layer, and a three milks cake, a very tasty white cake), two expresso coffees, a small bottle of water, and an Mohijo for the princely sum of $14.10 CUC plus tip.

We walked back to the casa on the second floor and were serenaded by the first floor. We aren’t sure why or what they were singing but it was nice. We crashed early as we were both rather exhausted from our standing in line in the hot cuban sun.