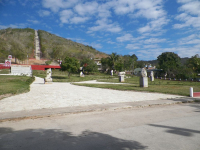 La Loma de la Cruz is a long staircase 465 steps divided into nice bite sized (twenty five step) pieces between every landing. We walked to the bottom of the staircase and then started our way up. It took us a while but we made it up with out any issues other than there was next to no breeze and the day was hot already at 9am. We got to the top and there is a little three story structure there that has an artist in the bottom floor an empty room as the second floor and the rooftop terrace that allowed a rather spectacular view, and a really great way to waste a scad of disk space. The stitched panorama is 202 Mega pixels. Walking down was a lot easier on the lungs but harder on the knees. Our nice breezed that had picked up at the top of the hill was gone when we got to the bottom of the hill and it was just plain hot again.

Cuba is blessed with some very beautiful and interesting public street art. Everything from the prerevolution statues to the post revolution modern sculptures and installations to the very unofficial street graffiti. Bonnie and I consider the old churches we see as art galleries that concentrate on religious art. The walk to and from La Loma gave us a wide sampling of all. 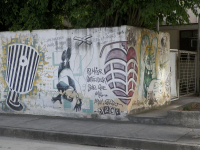 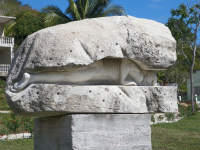 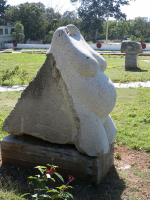 We walked back down toward the parks and when we got to Parque Cepsedes the church was open and we were able to look around. It is a very interesting church and the stone work is incredible. The church also has bats in the belfry fairly large fruit bats by the look of them. 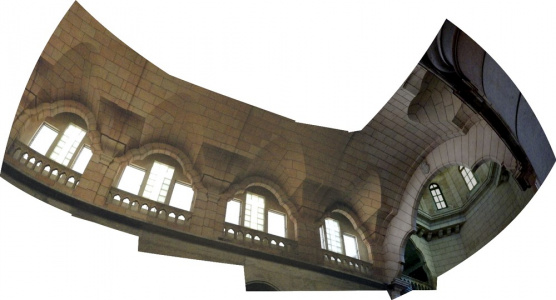 We left the church and headed down to the Art house where there is a nice cafe and a guard to keep the pesky beggers away. We had one guy that just wouldn’t let go and another that was just being annoying. There were two or three Transtur buses from the resorts on the north shore beach area. They have a limited time in Holguin during their excursion so the beggers have to be out in force at the right time. If you avoid it you hardly get anyone bothering you. Hit when the buses are in town and it can be rather intense. We were pestered until we disappeared into La Torre for lunch the place where we had the good meal the night before. The waitress smiled to see us and we had a very pleasant lunch.

When we got back we walked around pretty much ignored by the locals. We spent most of the afternoon touring the Provincial Museum (the building is very nice all by itself) It has lots of info on the indigenous people, the Revolution, music from the area and some very nice art. We went to another gallery but it was being fumigated and closed until later. We passed completely. We went down another park and sat in the shade and watched the locals come and go at the bus stop. It was a little early for dinner but we went back to the 1910 Restaurant and had an absolutely fantastic meal again. The Octopus wasn’t quite as what we had in Santigo de Cuba but it was still very good. 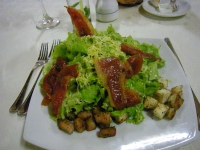 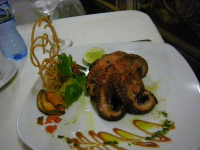 We hadn’t heard anything from Nicole so after we got back to the casa we sent her a text asking how things were going. A moment later we got the rundown. The meds are taking a little longer to get straightened out so he is staying put a little longer. Craig my nephew, Nicole’s cousin, took the great grandkids in so that that would have added a little excitement. John is doing ok and Mark is coming up this weekend to help out with mother. We should be home Wednesday morning at about 1am so we will be able to chip in then.