Pepe made our breakfast again, no eggs today either. We did have bread, apparently the bakery where most of the people get their bread had run out of flour so bread was in short supply. One of the other people we were talking to was complaining about not having bread.

We walked over to the Viazul bus terminal and waited, watched a lot of music videos on the big screen and watched people as they trickled in.

The Viazul bus drivers were standing around and chatting and we were 15 minutes late leaving the terminal. Instead of putting us in front of the resort buses we were in the long line behind the resort folk. It didn’t help that the line we were was slow, three people served in the time it took for one to get served on our side of the fence. Growl, Bonnie was getting more and more annoyed the whole time. Next time I might seriously consider taking a taxi, if Viazul keeps going down hill.

People were talking about a storm hitting the east coast and we were wondering if we were going to get out. The plane from Halifax arrived on-time so that a good sign, our plane arrived on-time, another good sign. We left and flew up the center of Florida. We watched and tracked where were were by watching for places we knew along the ICW. We saw the Vehicle Assembly Building at Cape Canaveral, I tried for a picture but nothing came out. We watched and the snow seemed a long way south this year. We were hoping that it might have something to do with flying over higher ground but it was a LONG way south.

The mountains over (I think) Pennsylvania were really neat and this was the closest I got to getting a decent picture. 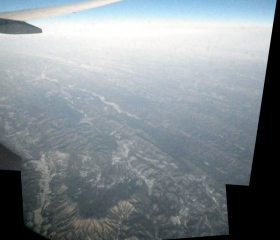 We had a long wait in Toronto so we walked over to Terminal 1, checked in at Air Canada and went to a restaurant for supper. and I had a Beer and a fish and chips and it was $35. The most expensive dinner for two people we had had in the month, but airport prices are obscene. Bonnie nibbled off mine and it was plenty big for the two of us, Bonnie wasn’t hungry.

It was funny normally we don’t see anyone we know on the flight, we were surrounded by friends on the way home, Tom a guy I went to university with, was beside us; Denis and Jane Lovely, boating friends, in the seats behind us; and Jim York a Masonic brother, and his wife returning from Jamaica, were in front of us. We had a bouncy flight. It was nice catching up with Tom.

The landing was interesting, when we landed we were in snow and a fair lot of it. I hadn’t landed in that much snow since the old EPA bush pilot days. We were blasting down the runway and where the two runways intersect in Fredericton there was a clunk, bare pavement noise, and clunk and we were in snow again. Wrong runway guys, might not have been but it sure looked like it.

Paul was there to pick us up at almost 2 in the morning. He dropped us off at the house and we dropped the bags in the garage. We never take anything from any trip into the house, that includes the clothes we are wearing. Everything, including the carry-on bag goes from the garage, to the washing machine, to the outside clothes line to limit any critters that might have come home with us.

Before going to bed we turned up the heat a bit, Paul had already turned it up from our being away low setting, we turned on the water and drained all the air. After waiting to make sure the water stopped running and we didn’t have any leaks, we turned on the hot water tank and went to bed. Another successful trip.

I hope you enjoyed the blog of our trip. If you decide to look at the full gallery beware it is 530 pictures. Lots of great stuff to see, but I should have been more selective.