February 19 The Plaza de Revolution, the stadium, art gallery and another good restaurant.

We got up and had breakfast. We are rapidly running out of stuff to see in Holguin, even with a day chewed out for bureaucracy. We walked over to the Plaza de Revolution where they have huge rallies every May 1st. We got lost on our way and a nice cuban guy named Ramon walked us over. He was trying to brush up on his English. He says he’ll need it when the Americans come. Everyone here is excited by the idea of the US dropping the embargo and letting their people visit.

There was a 1CUC charge to visit the Plaza and 5CUC charge for the camera. Unfortunately the museum was closed and there wasn’t anything to see but there was still a 5CUC charge for the camera. We walked around and there was very little to see. A couple of monuments but really other than a nice walk and a few nice sculptures along the way the Plaza de Revolution could be a pass and you really wouldn’t miss anything. We enjoyed the walk the most.

We walked back to the casa and had a bano break and plugged in the batteries for one of the cameras and headed off to the Viazul station to see if we could get tickets out of town. Just in case it turned out to be another multihour lineup we headed to the Delicias Cubanas one of the other restaurants on our Trip Advisor list. It was very good as well although the prices are a bit higher than the other ones. The food was comparable to El Torre just add a CUC to the price (if not a bit more). Still very good food.

We made our way to the Viazul and didn’t even have to wait in a line for them to tell us that they wouldn’t take a reservation. Viazul has really become my top reason not to come to cuba. I welcomed the idea of having a real reservation system but all it has done has turned the system into “Bugger off until the bus shows up and we see how many seats are available.” We are not happy with reservation agents and people in the terminals. The banos are the grossest in the country and you have to pay for them. There are now a lot of Cuban’s using the Viazul buses to travel and they think the banos are gross beyond words. There are more and more free banos and even the free ones are much cleaner than the bus station ones. The banos on the buses are usually locked as the drivers have no interest in having to clean them.

From there we walked downtown. Another cold front is hitting us. The temperature is cool enough that we came back to the casa in the afternoon to put on long pants.

On our way back to the casa we saw the entrance to the cemetery and did a quick walk around it had a few really beautiful monuments as well as a huge masonic crypt. There is almost no room to walk around the graves, they are packed very tight. 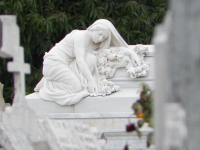 Bonnie had her siesta and I did a little work on the log and charged up the electronics. By the time the siesta was over it was time for an early dinner so we were off to the 1910 again. It has turned into our favorite by far. We have been sharing one salad, one main meal and one desert, tonight they split our main meal into halves without us asking. In the middle of the meal the lights out. We made a joke about having a candlelight dinner and a few minutes later a waitress shows up with her cell phone flash light turned on for us. They opened the windows and we were fine we didn’t need to waste her cell phone battery. They started up the generator and most of the restaurant had lights (except for the little section where we were) but before our desert came the power was back. 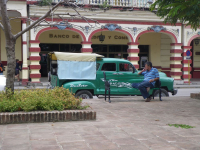 We paid the waiter and he apologized for the power but we just shrugged “It’s happened before.”

“Yes in Cuba, and Canada, and the US, and the Bahamas, and, and. It happens everywhere.” We got a good meal and the staff tried to cover as best as they could in a situation they had little control of.

I sent a note off to Nicole but no response back yet. So We’re guessing not much is going on. Hopefully we will be off to Varadero tomorrow night so we will be back where an emergency exit is at least possible. We could fly out of Holguin but it would probably cost us a pretty penny.