February 2, The planted, the plants, and the almost planted.

We had our tour booked but Beatrix was not around this morning so we were a little unsure if the jeep was leaving at 9:30 or 10. It turned out to be closer to 9:30 so we were good. Our first stop was the cemetery(cemeterio patrimonial Santa Ifigenia). According to the guide books, this is the second most important after Havana. There are lots of soldiers of the 26 Julio movement and the national hero Jose Marti is buried here. They have a changing of the guard ceremony every 30 minutes, 24 hours a day. It was interesting to see. The tomb is said to have been created as it is because of a poem of Marti’s that said he didn’t want to be buried where the sun could not shine on his bones. The tomb is shaped so that at some time during the day a shaft of sunlight will always reach the wooden box containing his remains. I always enjoy walking around cemeteries particularly in the south where the statues and art work is incredible. This cemetery was no exception. There was lots of amazing memorials. Emilio Bacardi of the rum fame is buried here with his wife, a huge pyramid marks his grave. When we arrived we were waved into the gate and we expected to pay admission but there was none. We figured out later we were part of a funeral procession and didn’t realize it. At least we were at the tail end. Saved a cuc each but would have happily paid the statues are amazing.

Click on any of these images to see the full size from the 2015 Cuba trip picture gallery There are more images in the gallery than are in these posts. 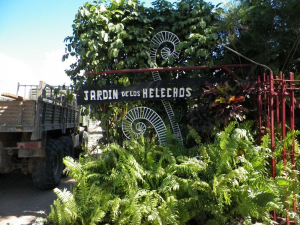 From the cemetery we went to Jardins de los Helechos. Garden of the ferns. There was a guide that had very good english and she took us on a long slow tour of the gardens pointing out lots of very interesting ferns. One was called a living fossil and is on the endangered species list. Rather than give us the latin names she gave us the common names. The lady finger fern has what looks like painted fingernails at the end. The bamboo orchid grows on a stock that looks like rod of bamboo. They have lots of orchids as well as ferns. They have pots that are everything from coconut shells to goat skulls. A hummingbird stopped and was very patient while I took a picture even after changing cameras I think it still was out of focus.
We bought a few examples of the art work created by the original curator he gave the Jardin to the government in 1974. There were lots of plants to be seen and appreciated. 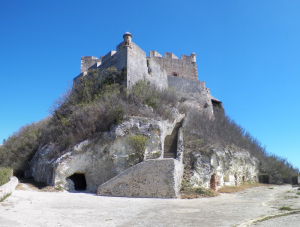 From there we went to the Castillo de San Pedro de la Roca del Morro or El Morro for short. By the time we got there it was nearly noon and the sun was almost straight overhead. If you weren’t inside the fort it was HOT. We started by going left and didn’t stop until we had hit every level and every room in the fort. We even got to almost water level. About three quarters of the way back up to the moat I was about ready to be planted. HOT, and a very long climb up the hill. Inside the stairs was nothing but brick and sunlight and little to no breeze. The thermometer the day before said 36 but this sure felt a lot hotter than that. It felt like we were in an oven.

From there we went back to the casa and cracked another LARGE bottle of water. We had nap under the fan and cooled off. We went to the number 2 place on Trip Advisor’s places to eat the Compay Gallo. Three of the top 5 places to eat are within a few blocks of our Casa. And they have all lived up to the reputation. The food at the casa has been very good as well so far I think the best food we have had in Cuba has been in Santiago de Cuba.

I’ve been having a few problems with my computers and tech. The little usb card reader I have is not always being recognized by my netbook and my netbook will decide it needs to do is diskcheck every now and then so I’m not sure what is going on. I brought my netbook to do the pictures and diary and because we almost ran out of disk space on the camera disks last time. (The little issue of dealing with 20ish Gig of photos when I got home may have had something to do with it too.) It was a cheap little portable card reader that I bought in a Walmart many years ago so it might be reaching it’s life. I have carried it in my case for many years and many miles so I may drop it in a drawer when I get home and use another for a while and see if it it what is causing the problems. Not sure how hard it would be to find technology stuff in Cuba. Last time we tried to find a 4G SDHC card when we were running low on space and we couldn’t find one. I’m not sure if it was a case of our bad spanish and not finding the right place to look or availability. I did a backup of the good pictures (450M) and the log and left the raw pictures (1.8G) on the disk hoping that it isn’t the netbook causing the issues. The netbook is also my nav computer on the boat so it spends months at a time on the boat in a less than ideal condition for technology too. Computers are like milk if you buy too much at the beginning it goes bad by the time you use it up. I must admit the 64bit machine at home handles the image stitching much better than the little netbook. It is doing surprisingly well though. Most of the time I’m doing word processing and spreadsheets so I don’t need a real heavy duty computer.