February 20 A good bye to Holguin, We hoped, and a long wait to see if we could get on the bus. 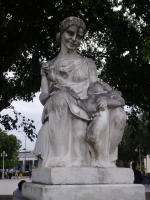 Got a text from Nicole they are going to keep John a little longer to get his meds adjusted. Good news everything is going well.

We’ve got a day to put in as the bus leaves at 2345 tonight. We have just about covered all there is to see in Holguin. We walked around and did some people watching. The main park has been undergoing renovations they cut down four trees and disposed of the fill and one level of benches and cleaned it up today. They had a big Volvo front end loader and a couple dump trucks around. At home, the kids that were around would have been fascinated and watching the loader. The kids here ignored it completely.

We walked around the outside rings of the park and saw a couple monuments we hadn’t noticed before. One was to the mothers of Holguin. I’m not sure the artist liked mothers, she looks like she is about to devour the child. The other was a monument to the service of masons to Cuba. 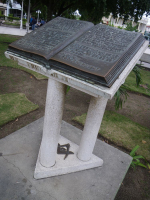 We walked around to the square to people watch. There was a judo match on at the arena and there were lots of people cheering. We saw of people come out after the match that were dressed in the Cuban sports uniforms like you see at the Olympics or PanAm games. Cuba has done well in Judo at both. We people watched a little more and then went to lunch at 1910 and dinner at El Torre. 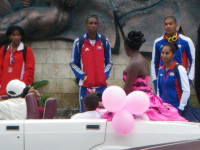 Our casa was very good and let us check out but leave our luggage at the casa until after dinner. We picked up our luggage and left a small tip to say thanks and were off to the bus station. It was after dark so we were by the taxi drivers before they saw us to ask if we wanted a taxi. We made it to the station and they wouldn’t sell us a ticket. We had to wait until the bus left Santiago de Cuba at 845pm before they would know how many seats they had. We waited. And waited, and waited. At 845 Bonnie went up to the booth and asked saying “No Casa tonight” the guy called the bus and they had at least two seats so he sold us tickets and gave us the boarding passes. We felt much better and closer to making the trip. 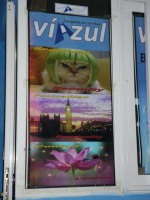 At midnight we were able to get on and get the last two seats together on the bus. We were almost at the back of the bus, but at least we were on. We had a lot of locals boarding on the bus with us and I was surprised that we got a seat together. The locals were not impressed with the bano at the bus station either.

We had a fitful night of sleep, bano runs, bouncing in uncomfortable bus seats. Mine seemed to also have a bad squeak that was worse with every hard bounce in the road.