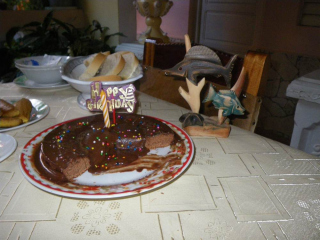 We had breakfast with a birthday cake and a present from Lily! Lily’s birthday cake had a different icing than we were used to, almost a cocoa icing but an awesome chocolate flavor. We loved it, and I can’t thank her enough. I got Bonnie a trip to Cuba for her birthday! Gave Lily a load of laundry to do for us as well as asked her to call the next casa. They had called the previous day looking for us, the first one to ever do so but Lily called and everything was ok. We expected the laundry bill to be 10-14 cuc if she charged what the previous casa had charged but it was 6 cuc so we were very happy. 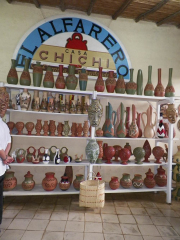 We went to the pottery place not far from the casa and we knew we were close when we saw the Transtur bus. The pottery was being made at the place so there was no question about it’s origin. The kiln was there and there were people working on stuff made in the store. We really liked lots of stuff, it was very different than the stuff we can get around home. We ended up buying a piece of pottery, (now all we have to do is get it home!) It is an interesting piece. If you visit remind us and we will show it to you.

We saw in the guide there was a hop-on hop-off bus for Trinidad and we had our eye out for it the whole time we were in Trinidad and never saw it, until the afternoon we were leaving, it isn’t a open top bus, just a regular bus that has a single stop in town, no sign telling you were it is. We were thinking about jumping on but weren’t sure if it was the last run or not so we passed. Too bad.

We sat in the park for a while and people watched, then went to the Iberstar and had a mojito, (3.75 and very good), and a cafe colida. Nice bar. 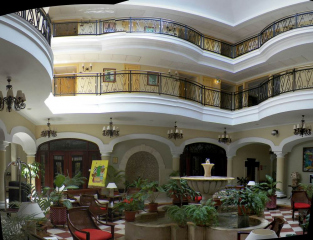 Went back to casa, did our packing and cleaning up, a spanish lesson, and read up on Camaguey. We had supper in the casa. Lobster for supper and it was extremely good. We settled the bill and got Lily to get us a bicycle taxi for the morning.

We had a great time at Casa Lily y Carlos, their card says Hostal Lily y Carlos of the 6 dinners we had in Trinidad, 3 were at Lily’s and they were the best dinners we had, they were also the least expensive. We would definitely go back to Lily’s if we were to go back to Trinidad, and I would recommend staying there to anyone. We really appreciated the casa feel compared to the hotel feel of the last casa.