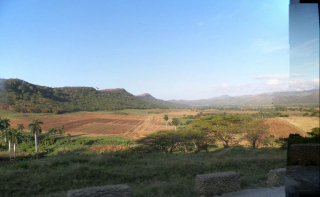 We left Lily’s on a bicycle taxi and got to the Viazul bus station. The bus left late and the bathroom on the bus was not working (not an unusual occurrence), by the time we got to the first bathroom stop Bonnie and I were the first off the bus, Bonnie dug out two coins I got a quarter and Bonnie got a 5 centavo. The attendant gave Bonnie the 5 centavo back on the way out with a scowl, Bonnie found another coin for her and that made her smile. Late leavin the lunch stop and almost an hour late arriving in Camaguey. 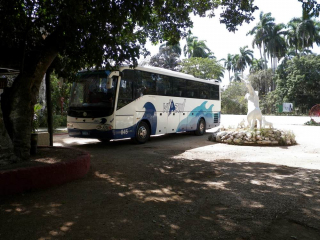 We werer met by a guy with a sign that said “Megual MacDonalg”, close enough. Got punted to another driver and a guide, that made me nervous. Driver dropped us and the guide took us up the pedestrian street to the casa. We are in a central room, AC only, view at the window is a large heat exchanger and a flat roof. Outside the room is a nice patio area and on the roof is another area you can use. We liked sitting up there at night.

There was another couple at the casa, she is German, he’s from Arizona and living in Mexico. She did translation for us. The Casa owner has little English. This week is Camaguey’s 500th anniversary party. Lots of festivals etc. Supposed to be a very good dance troop here. Bonnie says the Ballet de Camaguey is a world class ballet company. The wife of the couple suggested Transtur over using Viazul as it costs the same and they pick you up. There is a large hotel across the street. We didn’t get the Viazul tickets and its a log way to the bus station. We will check on Transtur tomorrow. She was saying that the average government wage is about 20 CUC a month and people need about 100 CUC a month to live, so everyone is keen to work.