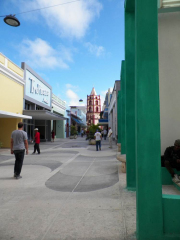 There is very little English spoken at the casa, other than by the guests. The family lives in a very separate area from the guests so the casa doesn’t have the casa feel. This is more of a hotel than a casa.

We were planning on walking around then back to the casa for a siesta then out to the theatre in the evening. We saw a few churches and squares. Lots of artwork everywhere. We walked the length of Republica up as far as the church beyond the train station. On our way back down Republica above the pedestrian section we stopped at the Municipal Museum. Lots of stuff and as the guide says, no theme. Archeology, antiques, stuffed birds and animals from all over the world, the list goes on. The building itself is interesting. Well worth our 2 CUC entrance fee. 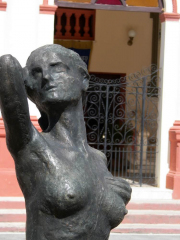 We walked back down to the theatre and ran into a guy how claimed to work with a Cuban musical group called Deseada, or Deseado. The group was mentioned in a brochure we saw, it is a creole group. He told us about working with them and it was interesting. It sounded like the show at Maceo was going to be a really good show and we shouldn’t miss it. We decided to go the show on Maceo that night and then the ballet at the theatre the next night. 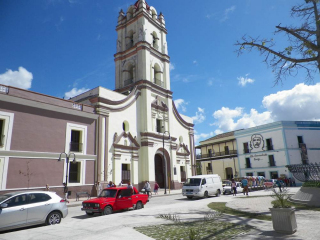 We talked about a lot of Cuban stuff. Last week the place was full of dust, scaffolding, and painters, this week it is pretty spiffy. All the painting had to be done for this week. They were in a rush and missed one side of the church tower. (We checked later, they had missed two sides.) It was almost like someone stood in the middle of the square and told the workers to paint everything you can see from here. They couldn’t see those two sides, so they didn’t paint them. No matter where we were there were places where there was a bit of trim missing paint, or the paint seemed to have run out so they stopped. The quote I remember from the brit was typical of a brit “they couldn’t organize a piss-up in a brewery”.

We stopped at Esperanza, a little bar across from Restaurante Isabelle and had the best mojito ever! It had a touch of lime which really brought up the flavor, and 1.50 CUC according to the menu, except the waitress decided to ding us for 2 CUC. So that ticked us a bit, but considering it was the best mojito we have ever had for 2 and we have been paying 3 that wasn’t too bad. We stopped at El Globo, a supermarket, and bought a large 1.5 liter bottle of water for 0.70 CUC.

Before we left I downloaded a bunch of Cuba tourist apps for the tablet. All of them were absolutely useless. The funny thing as I was getting more and more frustrated at actually trying to use them, I noticed that one of the pictures in the app was showing where I was sitting from the roof of the hotel across the street. Cuba Free Travel Guide, Cuba Travel Guide by Triposo, Cuban and Havana Guide, none were worth the disk space. Any guide that requires either a data plan or wi-fi is useless in Cuba. If you are staying in one of the Government hotels with wi-fi, they might be of some value, until you step out of the hotel. We also found our spanish english translator to be useless as it required wifi. The spanish english dictionary was VERY useful. If you are planning on using an app in Cuba, download it, turn off the wifi and/or your data plan and try to use it. If it works at all, play with it. One of the apps had maps in it with no street names, so it was impossible to use it for traveling around.
We tried to find out how to use the Transtur bus but we couldn’t get any headway, back to Viazul. 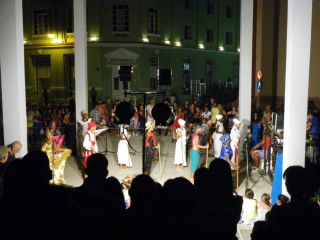 We went to the Plaza de la Solidaridad after a pizza and focaccia bread at Restaurante Isabella, worst mojito ever!

Lots of great people watching at the square. The dancing at the square was good, the music was terrible, way too loud and miked very badly. You couldn’t hear the singers at all and the speakers sounded terrible. We enjoyed the flamenco and the young ballet dancers.