February 6, If you don’t like the way I drive, stay out of the ditch!

We asked the casa to move our breakfast to 0730 so we could have a little extra time to get to our tour to the rainforest that started at 8:30 It wasn’t a long walk to get to the tour company but if anything went awry it would give us a few minutes to adjust. Breakfast was lovely a large pot of coffee a large pot of hot chocolate (VERY VERY CHOCOLATE called chorote) and the usual fixings. Bonnie’s eyes lit up when she poured out the hot chocolate. 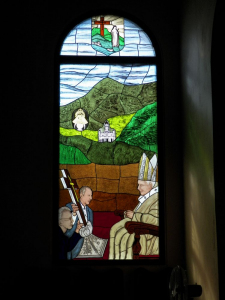 We walked down to the Cubatur office and had lots of time. So we looked around the church and the Revolution Square. Baracoa is just a little different and it seems fitting that Revolution Square in Baracoa is actually a triangle. Very geared toward tourism, Revolution Square is full of restaurants, tour companies, hotels, and churches. Every statue in the place seems to have been stamped with a Square and Compasses.

Everything in Baracoa is close, it’s a pretty small town. We got in a 15 passenger van and started out. We had a little girl from Turkey with us, she was 19 and doing a long vacation before returning to think about school. She needed a little taking care of. We had to stop at her casa to get her bikini, she didn’t know we were going to the beach and swimming at a waterfall. So we did. She lost track of her water bottle. And then something else and something else. We got underway and all was well, patience is a required skill in Cuba. We drove by a Masonic Lodge on the way to her casa.

We were driving into Humbult National Park, one of the largest rain forests in the caribbean if not the largest. There are 6000 farmers that still live in the 700 sq km park but they keep the trails and the place running so it’s a fair trade. The park starts 40km into the Cuban outback. At one point we passed an Ecotour jeep packed full of people that had to be beating their heads to death in the small back cabin. They were packed together pretty tight. We were tight but nothing like that. Note to self, Cubatur vans aren’t the best but I don’t think my head or back would have survived a Ecotour jeep ride. We caught up with a Gaviota tour bus same size as ours, we were driving up one ditch, they were driving up the other ditch, and the poor driver in the tourist car we were passing in the middle was looking rather bewildered. The roads were in much worse condition than the ditches.

The Dutch couple who are driving around Cuba described the color coded roads as yellow with red stripes are good roads. The yellow roads are, well, OK. The white roads are, well, there might have been a road there at one time but are now mostly potholes. We were on a white road.

We drove by the only Chocolate factory in cuba started by Che after the revolution. Tours are not available but the smell alone is worth the drive by. We had packed a lunch made from our large breakfast and had our bottle of water. The chocolate smell made the lunch sound rather sparse. 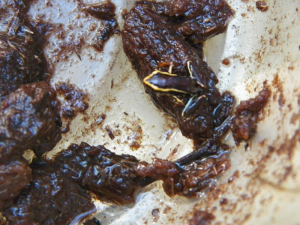 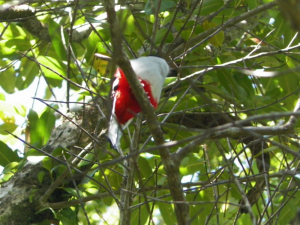 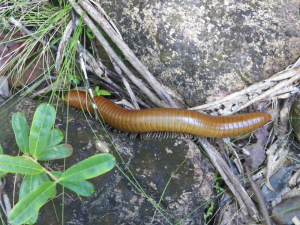 The guide we had was Karl, althought he was fine with Carlos if you wanted to call him that. He was one of the best guides we have ever had. His gift with language was impressive. He showed and told us lots about the flora and fauna of the island. Included were a number of orchids, the cocoa, philodendrons, lots of different kinds of palms, an American Kestral (the smallest falcon on the island), the Torrococo the national bird of Cuba, a very small (1cm as a full adult) and poisonous tree frog, called eleutherodactylus ibereria( a frog that is about one tenth the length of his name), and a 6 inch long millipede. He also guided us safely around a number of extremely slippery muddy sections as well as a few fords over the rivers. We made it to the waterfall where we were to have lunch and there was a farmer’s wife set up with a nut brittle (almonds, and cashews bound together with a chocolate sugary coconut glue that was 99% nuts (all local from the forest) as well as a sweet johnny cake with a guava preserve in it. 0.50CUC for each so I had to try it. I had my swimsuit on under my pants so I peeled off and headed up toward the waterfall. I should have brought my aquasocks the rocks were murdering my feet. But I did manage to get up to it with only my normal whiney wimpy feet noises. I had my camera with me so I got pictures for bonnie. It wasn’t a great waterfall but the water was refreshing as it was very hot in the rainforest.

There was a farmer that had his oxen team cart that “Just happened” to be going our way and would be happy to let us ride the four fords of the river that we had to make. We were happy to give him a small donation to the cause if we could keep the shoes dry for a while longer. They were plenty muddy but still dry. Dry feet are happy feet. We got back to the bus and made the trip back to the Playa Maguana, according to the guide (and our casa owner) the best beach in the area. We enjoyed walking the beach and bonnie got a few sea beans, always a treasured surprise. We got back to Baracoa in time for a nice shower and a bit of picture processing time. 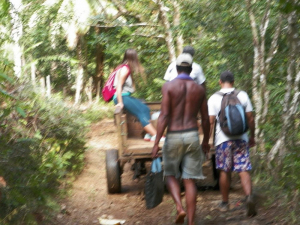 We went to one of the places listed on TripAdvisor as having good food, it is just down the street so it was easy to get to and easy to get home. We had the fish (we think it was swordfish) they asked an extra 2CUC because it was extra special good fish and the octopus. We had the meal deal which included a soup course with bread and a tomato sauce that was like mix between catsup and salsa only it tasted REALLY GOOD (Called lechita), a vegetable rice, sweet fried plantain, Bonnie had the coconut flavored swordfish and I had the calalou flavored octopus. Both were incredible. The octopus was as good as any we had in Greece. We loved it. Bonnie had a rice pudding and I had a Coco roto Choclolate with a coconut fudge backing. The only thing MaryAnn would have liked was the portion size.