February 9 2014 Sunday people watching, the ballet, and packing to go.

We were ready for a lazy day so we strolled down to Cafe Ciudad for a couple of coffees and did people watching. Sunday people watching in the Bahamas is wild. All the ladies dress up in their finest clothes and HATS, oh the hats are something to see. We were hoping for hats but were disappointed, Cuban women don’t do hats at all. They carry umbrellas to shade them from the heat and the sun. 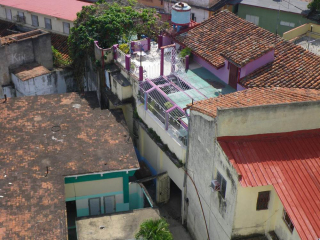 We wanted to try for the church off of Parque Marti so we left and went that direction only to be disappointed again. We did a different route back toward Plaza de la Solidaridad and sat down to do more people watching. We watched for a while and then walked up Calle Republica. There were lots of Cubans out today as it was Sunday and people were out enjoying a beautiful day. Lots of locals in the streets and the restaurants. We went to the 5th floor of the Grand hotel for a coffee but the restaurant wasn’t open, so we took the stairs to the 6th (the roof) and took lots of pictures even one looking down on our casa. 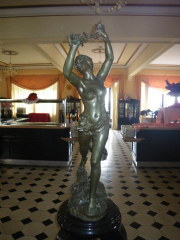 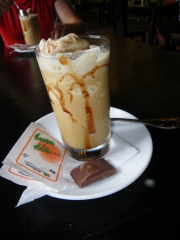 Since we were in the mood for a coffee we strolled over to Cafe Ciudad for a cafe frio and although they vary a bit depending on who is making them they go from very good to very, very, good, and 0.50 each.

Back to the casa for a siesta then we walked over to the Plaza de la Trabajadores and watched people for a while. We watched a young woman go by with really fancy shoes with about a four inch heel, very stylish as they matched her dress. Later when we were over by the theater we saw her again going in the stage door for the dancers. I think I recognized her as a “Village girl” sat behind the sound guy on the floor and watched the ballet again. We went three times and the next time we go back to Camaguey our first stop will be at the theatre to see if anything is playing. If the same ballet were playing I would go watch it another three times. It was really something to see. If it wasn’t the ballet I’d would go to whatever was on.

The restaurant we had we had our eye on was closed, so we went back to Restaurante de la Carman and had Uruguay Beef (Breaded beef Cordon Blue) and Shrimp in Tomato Sauce. Both were excellent. Two Cuba Libras and a water, with tip for 15.50. We then had to go back to pack and sort out what we owe the casa, 5 beer and a coffee.

Cuba is a funny place, the restaurant was full of locals paying with CUCs. The food was top notch and compared favorably to any we have eaten anywhere. The napkin was one ply of a two ply kleenex cut in half.