We had breakfast scheduled for 7 but we were ready early and so was Pepe so we were done eating by 7:10 We walked over to the bus station and it was a zoo. We were glad that we had our tickets already. It was a long bus ride to Cienfuegos. It was good to be on the sunny side of the Viazul bus. The AC was on high and people on the shady side were cold, we were ok. Bonnie picked the right side. From this point on we always tried to be on the sunny side of the bus whenever we traveled. They have good heavy curtains that can be drawn against the sun but it can also be opened to provide heat against the AC of the bus.

When we got to Cienfuegos and the bus station was a mess of confused people. We got our tickets and the time was different than the online schedule 1245 not 1330. The taxi took several guys to get working, one to add fuel, one to prime the carburetor, one to turn the key, and one to tell us everything was fine. I’m not sure what the car was actually burning but it smelled more like turpentine and paint thinner than gas. 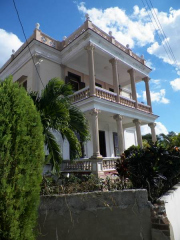 The hotel was the Hostal Bahia. It is a nice hotel but security was a bit different. It had a safe so we were not concerned. There was always someone around, we never came in or out of the place without running into one of the owners or house keepers/cooks. The window of the room opens onto the patio. There is a nice handle on the outside of the window to make it easier to open, there is no handle on the inside. There is a nail that you can put in to hold the window open, but no way to secure it closed. I’m actually quite sure, after looking at it, they mounted the window the wrong way around. We locked anything movable into the safe and didn’t worry about the rest. If someone stole our clothes that would be a pain but not terrible. But seriously, we dress much shabbier than the average Cuban. We immediately noticed an uptick in the fashionable ladies with their nice dresses and high heeled shoes.
We walked down toward the end of the point of Punta Gorda. There are lots of casas here and there are lots available. At the end is a large hotel catering to tourists, lots of bus tours end up there. We walked by as three large Transtur buses arrived and belched their passengers. The restaurant next door is a very fancy place with more decoration than any place we have ever seen. 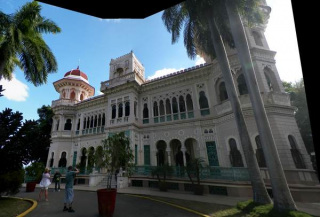 The Palacio de Valle is quite the place. On the way down the street we walked by the Club Cienfuegos a fancy yacht club and restaurant aimed at the bus tour crowd. 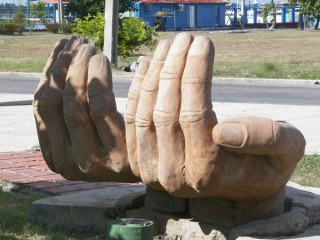 We also did a walk around the Parque de Esculturas, the park is full of sculptures it was really interesting and we enjoyed it a lot.

The hotel opened a restaurant next door called the Finca del Mar, and didn’t provide dinner at the hotel, breakfasts yes, but dinner, no. The restaurant pulled two pranks on us that made sure we wouldn’t go back. The first was when we ordered water the waitress brought the expensive imported bottled water and cracked it before we could object. Ok that was bad enough, the second trick was when we ordered two appetizers to share and we got an order of bread to go with it we thought it was part of one of the appetizers, it wasn’t. The two bottles of water, and the three (two of which we ordered) appetizers we ordered cost more than most of the other meals we ate in Cuba. The food was good, just very expensive and the waitresses are dishonest. I would not recommend going to the Finca del Mar.

The trip to Cienfuegos was through big time farming country. Larger orange groves than we ever saw in Florida, lots of sugar cane, bananas, etc, even beef cattle like you would see in Texas. Very pretty countryside. 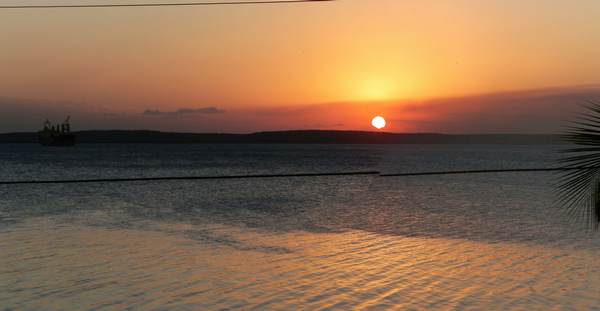