The night club next door kept us up for a while and then we were awoken again when the patrons left laughing and singing as they walked under the window of our room. Walked up to Jose Marti Park and toured the theatre. It was an impressive piece of work. 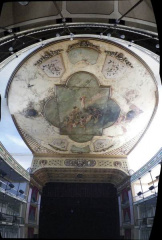 We ran into the cleaning crew of the local Masonic Lodge and got a few pictures and gave a small donation to the lodge. We went over to the Infotour desk and tried to get information on booking a trip out to the Botanical Garden and the fort, and came away with some numbers on cost but that was it.

We had soup for lunch at a very nice but small place off the pedestrian street. There was a hustler there trying to book us into using his friend’s cab. Turned out the cab driver was the husband of our waitress. The driver had very little english, but the prices were good so we booked him for the next day. 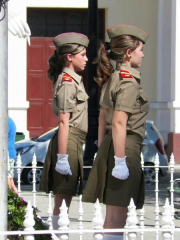 The congress was in session and they had a ceremony at the Marti Memorial complete with a bunch of cadets to march around and look good, and they did.

We went in search of the cemetery and it was rather funny at times. We were walking across town and it was a long walk. We saw lots of pretty poor housing and some very poor people but they all greeted us warmly. We had the map out trying to figure out how far we were when I looked over at a guy that was sitting nearby. He just smiled at me and pointed at the street across the way and made a shooing motion. It reminded me of Greece when the guy just pointed and said “Castle”, this guy didn’t say “Cemetery” but he knew what we were looking for. It was well worth the trip it has incredible statuary. There are lots of pictures in the gallery. 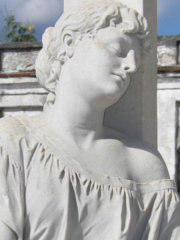 We were tired from not sleeping and walked down to the marina. They wanted 1 CUC to enter but I asked about the restaurant, they said it was free but they said it wasn’t open until six and it was just after 5. We went down to the Palacio de Ville and the waiter sat us down and gave us the menu pointing out that there was a $25 minimum. We looked a the menu and the prices were a little higher than we were used to but not bad, the two of us could easily, with drinks spend $25. We thought we better check and it was $25/person not $25/table. We just couldn’t eat that much food each, short of drinking a pile of mojitos we didn’t have a chance of eating $25 worth of food, so we left. There was a small restaurant just up from the hotel called El Chinito, so after sitting at the end of Calle 37 for a while we went there. We had fish and chicken, ok but not great food, 10 cuc each.

We went back to the casa and went to bed early but were awoken again with the music and again with the patrons leaving after the night club closed. There are about 40 pictures in the gallery for this day, lots of pictures of the theatre, buildings around Cienfuegos, and the Cemetery.