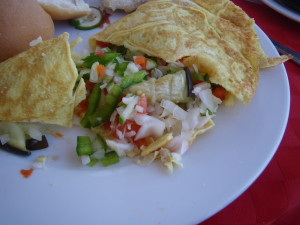 We had a vegetarian omelet for breakfast, a one egg omelet with a cabbage salad inside. 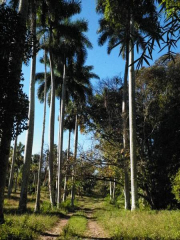 We were met at the Casa after breakfast by the taxi driver and his friend. Both Bonnie and I notice the driver slip his friend a commission. The taxi was an old Lada in OK shape The taxi driver spoke no english but we did ok. The Botanical Gardens were neat. We saw lots of flowers and almost stepped on a meter long snake coming out of the cactus garden. The body was black, the neck going grey and the head had a red tinge. The neck flattened a bit like a cobra hood. The books say there are no poisonous snakes in Cuba, wish we had read that before going to the Gardens. If you ever see a picture of and old car on a road bordered on both sides by Royal Palms, it was probably taken at the Gardens, we recognized the frame of it immediately. 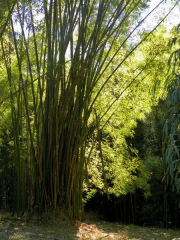 There were large stands of bamboo where you could stand inside a ring of huge bamboo stalks. It was like standing inside a drum group tapping their drum sticks all around you. It was a interesting experience with the wind blowing the bamboo. There were lots of birds and butterflys. The trees were in blossom and we got several pictures of birds we had never seen before. The trip to the Botanical Gardens was well worth it. We have two cuba guides with us, Lonely Planet and Eyewitness, rarely do we carry both. The lonely planet is our go to guide. The Eyewitness guide does better on specific spots but not as good on the wide scope of things. We should have brought the Eyewitness guide for it’s map of the Gardens, but we didn’t. We did pretty good just wandering around and enjoying what we saw. There were huge thatch palms that had leaves bigger than Bonnie. There was a huge Banyan tree, lots of cactus in blossom. Great spot to visit and take some time. 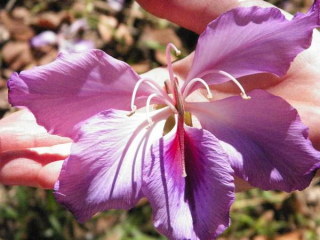 From there the taxi driver took us down the road to the ferry to take us to the little fort across the mouth of the Bay of Cienfuegos. The Fortress “Nuestra Senora de los Angeles de Jagua” was built in 1745. It repelled Sir Francis Drake, Jacques de Sores and other “dreaded sea wolves”. We took the little ferry across and as soon as we landed were hit with a barrage of casa owners, restaurateurs, and other “Hola amigo!” types. We shook them off and headed up to the Fortress. It was a quaint little fortress and it was undergoing a restoration and so far very well done. The view from the top level was spectacular. The entrance into the bay looked like the Oromocto River it was so narrow and snaky. Large freighters make the passage so it has to be deep. The current also seems to run pretty strong.

I was thinking about asking for a trip out to the Bird sanctuary for tomorrow but Bonnie said she wanted a day off. We could do the trip to the Bird sanctuary the day after. She was suffering from the middle of the night wakeups as well. We had a quiet afternoon with a little siesta and a walk around the local area. Had supper at the place just around the corner from the Casa on Calle 37, called Grill Punta Gorda. Two Mojitos, a water, and two main courses for 27 CUC. Food was good and plentyful.

There are another 30+ photos in the gallery for this day so take a peek.