January 28, 2014 Cienfuegos Marti Day celebrations and the day of doors.

No dance club on Monday night so this was the first good night sleep we have had in Cienfuegos. We were seriously talking of looking for another casa yesterday. We went up to Cubatour and asked about a trip to the Waterfalls and the Lagoon, 35 each to the falls, leave at 8 back at 4 lunch included. 70 was a bit much so no. She said a taxi to the Lagoon was 10 each way and 7 entrance.

Just off Parque Marti is the pedestrian street where the Cubans have most of the stores where they buy department store stuff, where the pedestrian street meets Parque Marti there is a right angle street where the artisans are set up. Most of the stuff is more unique that what we see in Varadero and looks like it actually might be made in Cuba. We walked the artist street leading down to the wharf and bought a sculpture of dolphins made from a cow’s horn

It was interesting to see a cruise ship docking at the wharf not far from the casa. I didn’t know there was a cruise ship that came to Cuba. It was the Louis Cristal, a cruise ship that goes around Cuba with a stop in Jamaica’s Montego Bay, you can embark at either Havana or Montego Bay it’s “your” choice. If you are interested check out yourcubacruise.com 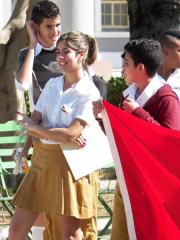 Today is Marti Day, a celebration of Jose Marti. Every school makes a parade to the memorial and lays a bunch of flowers and leaves. We saw lots of students on the way to town, there was one group we watched at the memorial.

Every once in a while something catches my eye and I’ll start noticing others, today it was doors. The way the light catches the worn surface of the door. I probably have 20 or more pictures of doors and windows. 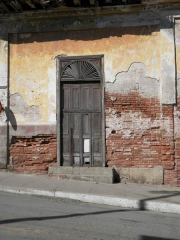 We had lunch at the Cafe Paris and met the driver on the way out. We arranged for him to come to the casa at 8 and take us to the Lagoon for $15. We spent the day login to lots of craft places and art galleries, there was some very nice stuff, bought a small painting for 7 CUC at a Studio Toller (workshop studio). The “Jardines de la UNEAC” gallery space was a beautiful space and we really enjoyed the visit. 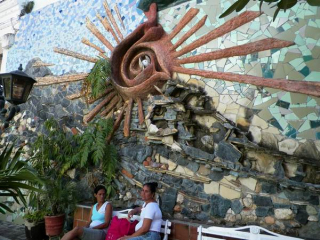 We talked for a while with a woman from Miami visiting family. We walked back to the casa as it was VERY hot in town. Bonnie is worrying about Camaguey and Santa Clara, as they are inland if the coastal area is this hot. We had a siesta and waited for the heat to die down before heading out for dinner. 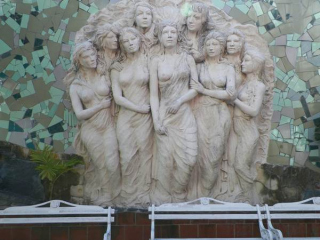 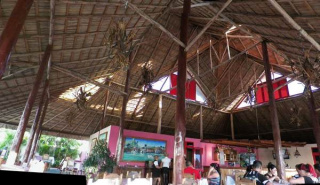 We had spotted a thatched roof restaurant on the taxi rid and it wasn’t far from our casa. We had our “What are they doing here!” moment. No-one expected to see tourists here. The food was extremely cheap but not very good. The Pizza Mixto, the crust was good but the toppings were mostly meat, was a bit oily. Bonnie said that a Pizza Quesa would be like our garlic cheese fingers at home. She is probably right. We followed it with Spaghetti Sausage, overcooked spaghetti noodles in tomato soup with chopped up chicken hot dogs and cheese. 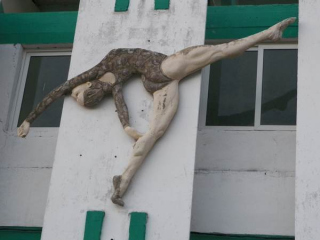 Walked back along the stadium and took lots of pictures of the sculptures around the stadium.