Our bus was leaving at 21:45 so we had a day to walk around and do not much of anything. We checked out of Pepe’s and Elisa’s and they were kind enough to allow us to leave our bags in their apartment and come back and get them later. They had another guest coming in so we had to go but that was fine with us. They kept our bags and I felt that they were much safer with Pepe than they would be at the bus station. Last time we were looking for a leather backpack for me so we did a lot of shopping and then decided that no matter how good it looked leather really wasn’t practical on the boat so after all that shopping decided against it. This year we didn’t have any particular project so it was wasting a day in the nice weather waiting for a bus. There was a cold front coming through so the surf was huge and the red flags were up signifying no swimming. That was ok with us. Last thing I wanted to do was go swimming and get a bunch of salt water in my hair for the bus ride. We walked up as far as Parque Jasone and walked around the park. The cave doesn’t seem to be any more open than it ever has been. The bano attendant wanted 1 cuc for 2 people. I came out wanted my money back, they were gross. They used to be one of the better public bathrooms.

We had a coffee at a cafe and watched the people. For lunch we had a two coffees and split a hamburger with cheese. My pronunciation of Queso was so bad the waiter came out with “Cheese. I practice my english and you practice your spanish.” I knew I massacred it but at least I tried. Some days my tongue just doesn’t want to twist in spanish (2 coffees and a hamburger with cheese was $1.95).

We walked down to the Infotur office and on the fifth try we had the same luck as the first four, nada.

We walked down and sat on the beach watching the surf and the few brave swimmers. There were a few brave souls. But not many, most were working on their tans.

We left decided to have an early dinner at the Casa del Chef and then pick up the bags and wait at the bus terminal. The “Bread with taste” that was so tasty last time was the same crusty white bread as you see everywhere. It didn’t hold a candle to the stuff we had the first time. Bonnie and I had a “bread with taste, a soup of the day (this time it was vegetable), and a tropical beef(200g). Normally when we see the grams listed it is a sign to leave the restaurant. The government restaurants aren’t normally that good. But this one was listed in Trip Advisor as being very good. Our meal this time was at best, average. The beef was tough but it normally is. The tropical beef came with a salad. Bonnie and I did our usual split and ended up with a good meal for two by cutting the single serving of tropical beef in two Cost for a beer, a water, a bread with taste, veg soup, and the tropical beef entre was $11.50 plus tip.
We thought the Casa del Chef was good one day for lunch and average the next for dinner. Such is life.

Pepe gave us his new card with his new email address on it. It goes to his phone so that it is very good for him. I will put it on the web site when I get home. We say their booking sheet for Feb when we checked our return reservation and they are fairly well booked. Nice to see. We’ll call ahead further when we know we are coming to cuba again. Bonnie and I are wondering what we will do next year. We like cuba but aren’t sure about another year. We may do trip back and just hit our favorite spots. 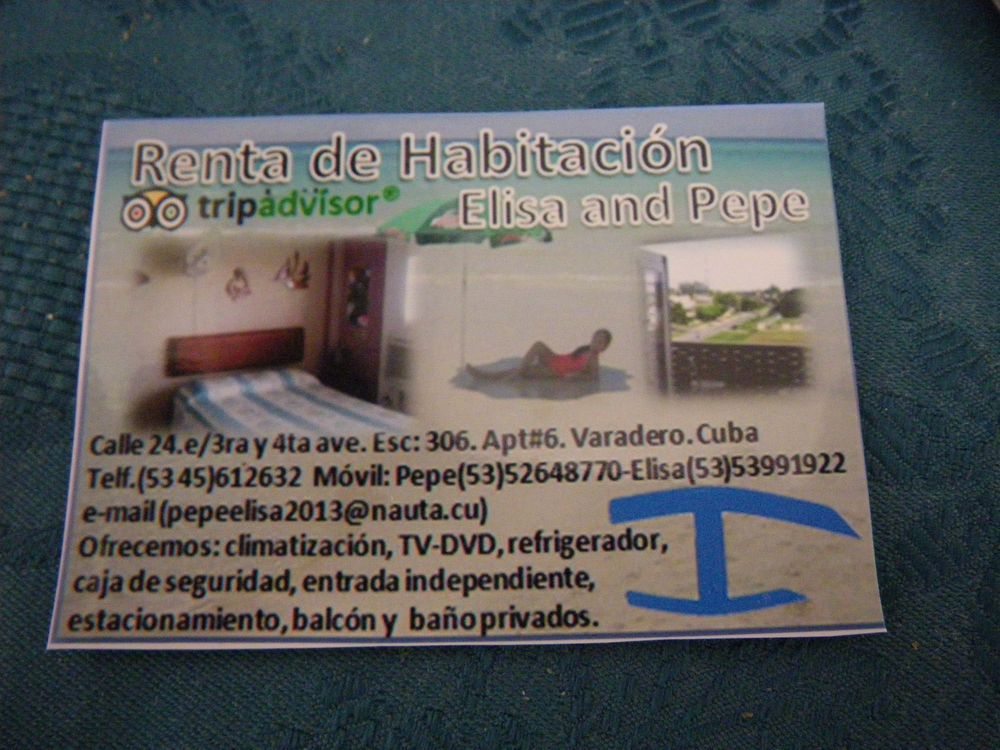