We walked out toward Calle 37 and barely got 50 feet from the casa and was asked by a bicycle taxi if we wanted a ride to the Viazul bus station. He wanted more than we paid the car taxi, we declined, eventually he came down to the car taxi number and we agreed. There was no night club on our final night so we had a good sleep.

Here like all of the bus stations in Cuba, this one is run by the person with the mop. He had the security guards jumping, the passengers jumping, he was definitely in charge of the station.

The bus was a good trip we had enough people that we had a separate bus to Trinidad. I took a bunch of photos out the window and got a few nice ones along the way. It was a fairly cloudy day and we were expecting rain, but I can’t remember if we got any. The trip from Cienfuegos to Trinidad takes you along the edge of mountains and then to the coast and you skirt the coast to Trinidad. The Caribbean was gray with the clouds. Lots of bridges crossing rivers that were rather small now but sized for a much bigger river. I can imagine in the middle of a hurricane the rivers are raging.

We had the previous casa call this casa a couple days before we left and they said they would meet us at the bus station. We were met at the bus station by a bicycle taxi which took us to the casa. Nothing in Trinidad is a great distance. I was initially annoyed at the casa calling a taxi but when we bounced down the cobblestone streets and over to our casa, we were happy to have it. Our little luggage cart would not have been the way to go on the cobblestone. He gave us a bit of a tour as we worked our way to the casa. We arrived at a very nondescript pale green door, and were met by Lilly, the casa owner. 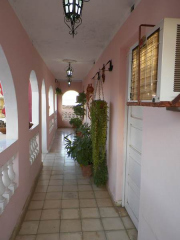 She seemed like a very nice lady and her english was very good. We paid the bicycle taxi and stepped inside to be met by Lilly’s little baby girl and Lilly’s mother. The place instantly had the vibe of a casa, the kind of place we really like, so much better than the hotel atmosphere of the last casa. We talked for a while and we really liked Lilly. She was an anesthetist, her husband Carlos was a dermatologist and he was away working for the UN in Africa for 11 months. Doctors in Cuba are paid very poorly and “we all have second jobs to live.” Lilly’s second job is her casa. 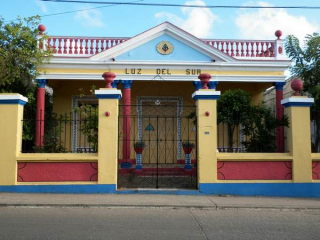 We asked if she could make us dinner and then set out for a little walk back to the Plaza Carrillo, the little park area just a few blocks from where we are. Just before we got to the Plaza Carrillo we came upon a very well kept and very good looking Masonic lodge. Masons have a long history in Cuba and it doesn’t hurt that one for the most celebrated people in Cuba, Jose Marti, was a mason. It is not uncommon to see a square and compass on a door of someone’s home or lodges in the communities we pass through.

Bonnie was tired and not real focused as we walked 3 blocks to the park. We found a Cubacan and booked a Train trip to “Sugar Valley”. Round trip 10 CUC.Tomorrow is a walk around tour and the next day is the train. We will book the Viazul trip out tomorrow. 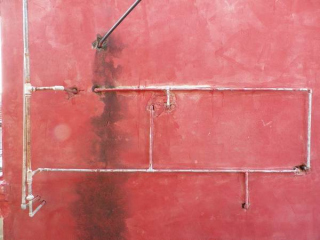 Dinner was excellent and we noticed immediately it wasn’t as salty as the food that we were used to in Cuba, a nice change. The housing density in Cuba is intense and often there is no gap between your house and the next. Trinidad is packed tight. Trinidad is celebrating it’s 500th anniversary and space is tight. When I came out of the room I was looking at the wall of the house next door across the interior courtyard of our casa. It took me a minute to figure out what I was looking at. When they put water into the house they didn’t bring water into the house and then do all the plumbing inside the house. They mounted the fixtures on the inside of the wall and punched holes through the cinderblock wall and did the plumbing on the exterior of the house. I was looking at all of the plumbing (without the septic pipe) that you would need for the bathroom of a house mounted on the outside of the house.