Great and huge breakfast again, we kept the bananas for lunch. We were awakened by roosters all around us after a very nice sleep. 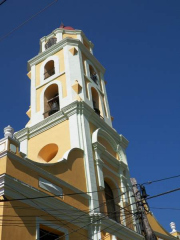 We walked up to the old city of Trinidad, it is a UNESCO World Heritage Site. Plaza Major, the center of the old town, is the focus of the tourists. We went up into the bell tower of the Iglesia y Convento de San Francisco, a monastery converted to the Museo de la Lucha contra Bandidos( Museum of the struggle against bandits). 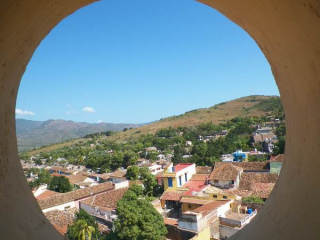 The view from the top of the bell tower is spectacular. The panorama stitched together is 54000 pixels by 5200 and is 43 megabytes, It looks great on a big screen but not something for the gallery. 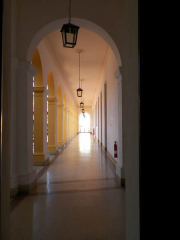 The rooms had displays on the revolution with a boat and a truck on display in the courtyard. Only the really good propaganda was translated to english and there wasn’t much of it. Bonnie’s spanish reading and language is much better than mine and I think she was able to read much more of it than me.

We came out of the Museum and sat in Plaza Major and notice that the Iglesia Parroquial de la Santisima Trinidad, (Church of the Holy Trinity) was open. An open church is always a treat so we went to visit while it was open. You never know if it is open because of a bus tour, and will close immediately after or it will be open all day. Our rule is if the church is open now, go in now! 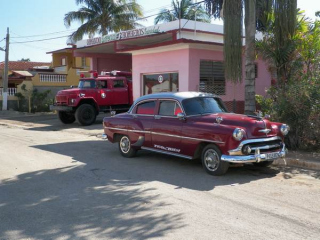 We came out and had a mojito at the cafe beside the church, BAD mojito don’t do it. The best thing to say about the cafe is the shade. We walked from there to the local artisan market lots of cut-work lace, nice stuff and really very good prices. Bonnie didn’t want any, saying we didn’t need any of it. True enough.

We walked to the train station and the train was just arriving. Back to the casa for a siesta and out to supper. We had Lilly arrange a taxi to go to the national park in the mountain for us. Out to supper at Trinidad 500.

I put lots of pictures into the 2014 Cuba trip Gallery and only a few of them are here. There are lots of interesting things that we see and take pictures of that aren’t mentioned in the blog.